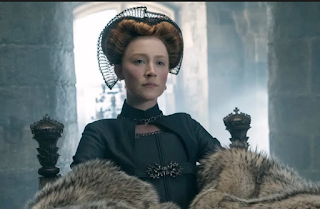 I'm hoping we still have two more movies in us this calendar year - assuming we can find two we want to see.  I know of one, but more on that if it happens.

#17 was Mary Queen of Scots. No comma.  ...and we saw it days ago, but there were other things in the blog queue.

I had seen clips over the last few movies we had seen and it looked good.

Saoirse Ronan did a good job. Margot Robbie wasn't bad either. The sets and costuming were good, if possibly not historically accurate. Somewhere in the movie was David Tennant and Guy Pearce, but I'll have to go on-line to see who they played because they didn't seem to be recognizable to either 710 or myself.  (update: I did go back - NEVER would have pegged Tennant in the role he was in; less so with Pearce after you see him in costume.)

I think it came down to the writing and editing. There were some missed opportunities on how we got from A to B in some instances.

Like the Queen Anne movie of a week or so ago, I can't vouch for any historical anything.

I'd say go for the sites - but even most of the locations were blah.

...and I'd say wait till it's on cable.  The preview though is really good.

We don't get to see this for another three weeks (so no surprise there). I can see me sitting through it, gritting my teeth at the playing fast and loose with historical fact as we now know. However, I suppose it's got to be seen - (sigh!).

I saw it too; I thought it OK - can't put my finger on it though. Probably because "I knew the story" and wanted it to be told 'well'. it was OK.