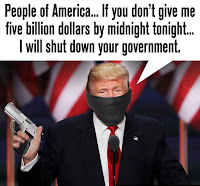 I don't wanna claim to be Nostradamus or even Miss Cleo, but back on the 12th, I'd totally predicted that BLOTUS flipping and flopping on his statement to be proud to be the one to shut down the government.

Let's just say, I'm less than shocked.  But with my premonition skills, I saw that coming too.

710 fears that no matter what, BLOTUS has won - regardless if he gets the wall.

I hear what he's saying. Like him or hate him, to his base he is the perfect spinner and no matter what those clips show, his base won't buy it.  But I predicted that one too.

I call 'bullshit' on the essential employees forced to work with no pay. Our niece's husband is an air traffic controller, who still has to work even though there will be no check until it is retroactive upon the government starting back up.

I'm not calling 'bullshit' on him not getting paid (exactly). Want this to end quickly and with no funding for a stupid ass wall?   Watch commercial air traffic come to a dead halt for a week - holiday or not.

BLOTUS is already killing the economy. I am scared to death to look at my 401k. He's killing the government workers - the ones who won't get retroactive pay. The ones who won't be pumping money into his economy over the holidays........or for rent. It also means fewer taxes they'll have to pay to reinvest into the country, who provides funds for infrastructure.

While I'm sorry who are directly effected, I'm sorry to say - this is not enough. It has to trickle down to his loser base. It has to hurt them and for long term.

no national parks either. I DO like your idea about the air traffic controllers though...