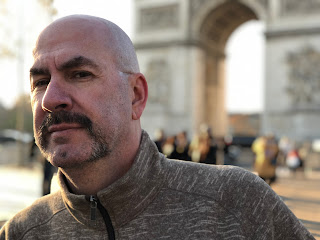 Since I can't bring myself to talk about politics, or dead politicians (honestly, why do people remember the dead like they used to be good. 41 was anything but. He came across as nice, but he wasn't a good president....at all).  And I can't even with Wisconsin pulling a North Carolina in terms of limiting the next admin, which isn't the GOP.  Fuckers.

Anyhoo.....why not just do one more travel post. Then I promise I'm done.


First off, it turns out Europe is NOT America.  There seems to be no European Disabilities Act.

There is not a bathroom to be found in Amsterdam, London or Paris that isn't up or down a flight of stairs, at least as steep as the one into Anne Frank's bedroom.  If you're elderly (as I am approaching), or disabled (as my leg sometimes makes me feel), then you are shitting or pissing your pants in the EU.

Our room in the Netherlands was room 403.  "Just take the elevator to 3", they said.  Wha---?  Sure enough, right next to 302 was 403. You opened to the door to an immediate - and I do mean immediate - steep spiral staircase. Once you navigate that, it was a great loft area with two lower sitting areas - both requiring steps. One set right off the side of my bed. The fact that I didn't fall down a flight on vacation is a testament to my sure willpower to live.

On a whim, right before we left the house of the airport, I shaved the beard I had for 8.75 years.

I had a few reasons for this. One - I was a bit bored.  Two - I opted not bring clippers to keep the beard trimmed. This way,  a mostly fully shaven face could stay that way.  Three - I could stop shaving my last day and still have a full beard by the time I got to work on Monday.

I'd say I couldn't lose, until I saw pictures of me.

It turns out, that beard hid a plethora of sins. And as much as I thought the fu manchu-ish cut would look ok on me, I believe this to be wrong. Now I just have a lot of reminders in form of pictures that get to stick with me for the rest of my life.

I considered trimming it so it didn't hang as much, but I'm not sure I could pull off the full-porn 'stache.

Currently, I'm back to full beard.

We attempted to be Canadian, save the 'eh' at the end of every sentence.

No one likes Americans - even less so with BLOTUS in the White House. IF people asked, we'd say we were from Toronto.  We weren't looking for trouble.

I'm not sure it went over when you're paying with American Express.  Do they have Canadian Express?

I learned how to pack a little better for this after the fact.   No laptop.  I never used it.  For anything. It is the first time I went on vacation and never logged into work during down time. We had little, but it was terrifying as it was liberating.

Even in the two days between returning and work, I didn't bother. Sure I had 427 emails when I got there, but too bad.  And anyone who needed me for personal stuff could text me, but there was little of that.

I'd pack another shirt and sweater and not pack that second pair of shoes. A well chosen pair that can be casual and dressy enough - and comfortable enough to walk 13 miles per day is essential, but all that is needed.  I had such a pair yet I foolishly brought another.  .....and I'd bring more socks.

It seems we hit Europe at the right time.

The day after we were home, protests in Paris shut down parts of the city due to bonfires being set, and police on high alert.

In Amsterdam, they just disassembled the IAMSTERDAM sign.  Apparently it was 'destroying community spirit'.  But she-males in teddies in front of window don't.

To each his own.

Still a very successful trip, if I say so myself.  We came back with nothing but memories. Not a scrap of art to be had, though we didn't look that hard. Not a shred of clothing to be worn. Not a token for anyone - even Shep.

Your saving grace is that you have the Ohio accents which can pass as though you’re from the great white north. The mustache wasn’t that bad in real life, although I am partial to beards. Interesting observation regarding accessibility.....never even thought about that, and You’re right about the stairs - can’t tell you how many times I’ve had to carry Holden down stairs when we’ve visited friends because they’re too steep for him. And now that you’ve learned your lessons about packing, you need to come back this way!

The first time I was in Rome (about 15 years ago) I encountered a fabulous wheelchair accessible toilet, at the bottom a very steep flight of stone steps. We have a long way to go for accessible design, but we are leaps and bounds ahead of the world. My father's theory on packing, take half as much stuff and twice as much money. I always check a bag.

A trip of memories sounds a fine trip indeed.