One of the Drunks 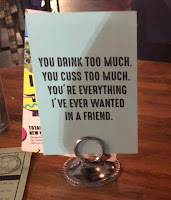 I'm a wee bit drunk.  Well, not now - but last night when I wrote this.

Last night management went out for a holiday happy hour. Big spenders that they are, there was funding for the FIRST ROUND of drinks.

Administrators are about 50/50 by gender. But last night was a veritable sausage fest. Of the 50 folks (or so) invited, there might have been 12 of us. Only one female joined and for about 15 minutes.  Hell, I was 25 minutes late and I was the third arrival.

The peers I'm closest to weren't there, which made it super awkward for me. Probably the others too. Three guys - two I assumed were gay and one I kind of hoped was - two aren't, and the jury is still out on the third. Go figure.

With my closer peers, we can go out and not discuss work. This was not true of this crew. Three beers and some really really good nachos were enough for me before leaving.

Though while I was standing around drinking, I took a pic of this little table placard (title image). I immediately thought of besties. I mean, how could I not.

Then I started to think about the last time I've seen them - and it's been far far too long. March, actually.  WTF?

So, as I start to draft this post, my ADD kicks in and I toggle over to SMS them the pic - and well, see below. 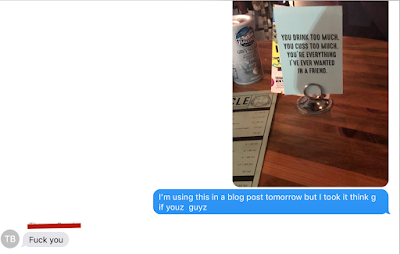 We're going to have to fix this not seeing each other.  Soon.

management is cheap. all for them and nothing for you.

I'm reading this post at work and just read out loud the table placard for my colleagues and laughed!

Your friend's response is hilarious too. :-)

that was well done !