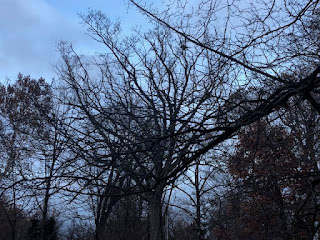 Winter is here.......though it's not. We still have a few weeks before it's official.

The leaves - for the most part - are gone from the trees, if not they yard.

Snow came before the last leaf pick-up. Enough so that we weren't sure the city would pick up the leaves we had piled at the curb. There was certainly no real way to get the ones that had come down afterwards.

Yesterday, we barely broke 20F. Those dog walks and errands I ran around doing with temps in the teens weren't really all that fun.

Still, it's not winter yet. We go back into the 30s this upcoming week, so there's that. While still in the first third of the month, the rest of it starts winding out soon. People will start taking off from work, though I don't really have planned time off.  I suspect I will take off a day here or there or a number of half days.

I'm almost over my cold. Yes - almost two weeks in. But by all accounts of those who have had this crud, it's a three weeker, so I might still have a ways to go.

Ok - go about your weekend now.  That was my one update.

took me 3 weeks to get over bronchitis. the cold weather didn't help.

My husbands family has a winter picnic in February in Cleveland, we are thinking about going this year. Yep we are nuts.

I had the three-week thing last year. It went on and on and it was very frustrating. Hope it passes soon so you can enjoy your sporadic time off for the holiday!