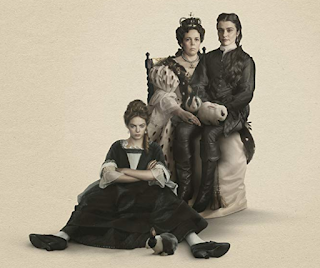 "Are you kidding me??

That is what some lady said at the end of seeing the Favourite.

That comment would be less surprising had I gone into the movie realizing the director was the same who made the Lobster.

I was put off to start as the at least the first chapter / act was filmed so darkly - and I do mean with, or without actually, lighting. And in the first 2-3 acts there were sudden fish-eye lens shots for seemingly no reason.

Then there was the score - challenging at best. Again, before I knew Yorgos Lanthimos directed it all seemed out of place. I mean, it still was, but at least there was a pseudo-explanation for it all.

I will grant that I know little about18th century England and how folks dressed.  The men fashions in the Favourite seemed to be more aligned with 17th century France. Powdered wigs, painted faces with drawn on moles, etc.

I'd like to say the acting was good, but honestly, it's hard to say when so much if slightly left of center. I'm always going to think that Rachel Weisz does a good job.  Emma Stone?  Meh. She was fine, but nothing more. I would have paid another dollar not to see her boobies or finger the Queen of England. But we don't always get what we want.

I liked Nicholas Hoult (whomever he may be) and I really liked Olivia Colman who not only plays Queen Anne, but will be taking over for Claire Foy in the Crown. She no doubt had the best performance.

I won't say I loved it, but said the same thing about the Lobster, and the more I marinated on it, the more I appreciated the movie. I went into the Lobster knowing it would be different. I anticipated more of a traditional period piece with the Favourite. I might have enjoyed it more - and laughed a little less at the woman's comment at the end of the flick - had I known who made the film beforehand.

We have to await the New Year before we get to see this (Why do so many British films get released outside the U.K. in advance of home territory? Rhetorical - it just happens).
I don't fancy it that much from the trailer, though must say that films featuring Queen Anne have been thin on the ground. Can't think of ANY, in fact, so in that respect I suppose it's welcome. Thanks for the warning of the over-use of the 'c' word. Good that the lights will be down so that no one should notice my blushes!

I loved 'The Lobster' when I first saw it. It had its TV premiere here a few months ago when I settled down for a re-watch. However, with in the opening frames the killing of a horse (I think), which looked real, I was reminded of its further portrayal of animals and found I was watching with gritted teeth and soon could take no more. Having said that, the film did end up in my Top Ten of that year. Colin Farrell was particularly good, playing against his usual hard-man type.

I hated that opening scene of the Lobster. Just hate it. Don't blush too much.....it's just a dirty word.

I think that 'Lobster' opening scene shocked me so much first time round that my brain wouldn't allow it to stay. That's why I didn't recall it.

Ha! Every time I go to a movie at an actual theater to see a movie directed by an artsy kind of director, I sense the same thing in the audience.

I've been to Gilliam, Aronofsky, and Besson flicks where I can tell the audience just didn't get it.

It's a marketing thing - the studio wanted them to look like mainstream movies, but, well, they weren't. This film has certainly been promoted as a period piece, and now it's racked up some award nominations.

Queen Anne, she with the reputation of being the most BORRRRRRRRING of all the English/British monarchs in our long history - and. boy, did she have some competition!