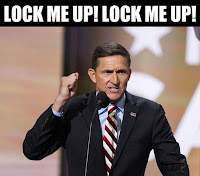 How much am I loving Judge Emmet Sullivan?

No offense to Robert Mueller, but I was never thrilled with the no jail time he negotiated with Michael Flynn. I get he was using it as leverage for the cooperation that Flynn was allegedly providing - until his lawyers semi-attempted to go back on it all saying he was "ambushed".

But Sullivan, he is not having any of this shit, from Flynn or Mueller's team. Sullivan wondered, aloud, if Mueller & Co considered trying Flynn for treason.

You just have to believe that Flynn and lawyers sharted in those Brooks Bros. suits..........and more than just a little, I would think.

And then maybe a full on dump when that promise of no jail time was looking like it was going to evaporate.

Unfortunately, at least for the moment, there is still no jail time. Though it looks like Flynn will have three months to work additionally with Mueller's team.  I'm guessing he will, as Mueller is now going after Flynn's associates.

IF (and yes, it's a big word for two letters) Flynn has any decency at all (and that is debatable), he's not going to drag his buds into the sewer with him. I have no idea if they are guilty of a thing, but any investigation into those folks will ruin their professional and personal lives.

There is little doubt Flynn is guilty - as he's already plead that to a number of charges. But you just gotsta feel that isn't all.

Personally, I'm hoping Flynn works with Mueller, gives up dirt one everyone, and then Sullivan still sentences him to like 10 years in prison.

Song by: Rachel Sweet
Posted by Blobby at 12:03 AM

treason is a capital offense; string him up!