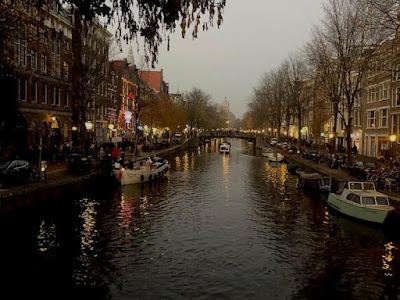 So, last year, before 710 ran out of vacation - as his, unlike mine, doesn't roll over - you saw us go to Orlando......mostly for a Space X launch, but we did theme parks.  Theme. Not Amusement. I was rarely amused.

We were in the same predicament this year. We considered Napa - as we didn't, we avoided fall-out from those fires. We considered the PNW. And then we just tossed around the idea of Europe.

Now, Blobby is sad to say this, but he has never been.  Almost anywhere. Canada, sure.  Mexico, dos times. It's almost embarrassing to admit.  The UK was on 710's list. Paris was on mine. Actually, Spain was #1 for me, but much lower on 710's list.

Whilst talking about this situation at our block party, neighbors mentioned Amsterdam. 710 got very excited by their enthusiasm. We went home and discussed. I was ok with Amsterdam if we took the train to Paris for half the time.  It was set.

With a little research, 710 figured we could fly to the UK from Amsterdam (and cheaply at that), which would leave us traveling to France via the EuroStar (i.e. Chunnel). 710 is a train geek, so this is right up his ally, and I wasn't about to deny him.

This now sounds like a rushed trip in all regards. Three cities in 10 days. And from deciding to go to take off - 4 weeks.

I've mentioned before, when it comes to trips we are not "planners" like good friends Georty.  They research and research, the plan, plot and scheme. I always feel foolish for our fight of fancy to their due diligence. Still, it seems to work for us. Overthinking tends to make me shut down - which is why we've been talking about Europe for a decade and done nothing.

So a little less than four weeks after making flight arrangements, we were on a plane.

That said, a blog reader, and now vlog ingenue, the Other Brett, who has been a long-time readers and sometimes commenter, used to live in Amsterdam, so I reached out to him for places to stay, etc. Brett was invaluable. Brett and I have become "online" friends - only due to distance. But it's been a better part of a decade. Since he lives now in the UK, we were going to have an opportunity to see it.

The location of the hotel couldn't have been better - though Amsterdam is so doable on foot, nothing is really bad. And walk we did. Everywhere.

The city is charming. The canals. The buildings. The 'hoods. The bikes. The museums.

We landed, room not ready, so we just explored. It's what we do best. While we had tickets for the Anne Frank House, the rest was unscheduled. We like to get lost, which is easy, and yet, not so easy, to do.

Parts of the city are like walking through malls. That part I'm not a fan of. The old-time storefronts were much better for me - though we almost never went in anywhere and never bought a thing that wasn't drink or food.

Everyone seemingly smokes there. Not just pot, though it's prevalent. No, cigarettes. Everyone. You hear that about the French, but it is much more popular here it seems.

Biking? Well that's the thing here. Everywhere. That I didn't get hit by one is pure luck. 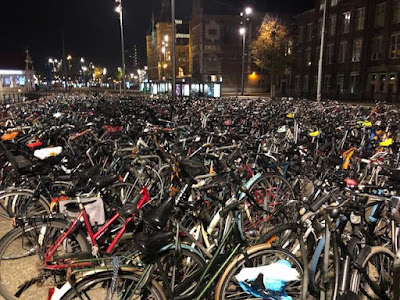 Here is one parking station. Hundreds, if not more.  WHO are all these people? And better yet, how do they find a space or even find their own bike afterwards?

I'll give the Dutch this - I never saw an overweight person in the city. It's all that biking, I tellz ya.

As much as one can, I "enjoyed" the Anne Frank House. The new renovations seem to work, though I have nothing to compare them to. The lead up, the audio/visuals are nicely done. The house itself is nicely preserved.

The rest of the time was mostly museums, especially the Rijksmuseum.  There are some really nice pieces there. Rembrandt mostly. Some Van Gogh's, but the majority are in his own museum down the plaza.  ....and of course Rembrandt-like works. 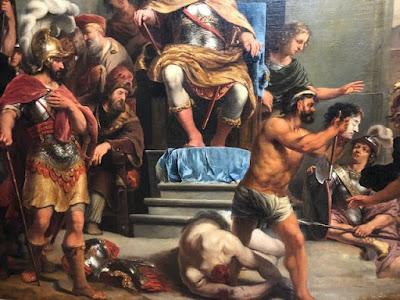 I do like this beheading one. The corpse. The victor.  The guy on the left clutching his pearls. 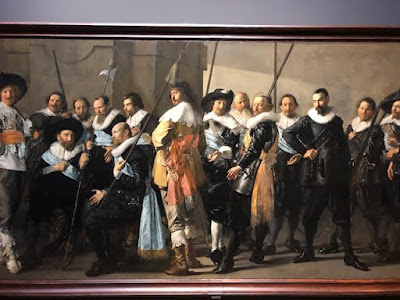 Or this one, where each guy is trying to out dandy the next one. They all win.


We walked the Red Light district.  I wasn't sure what to expect of that. Grandmothers in teddies in storefront windows was not on the list. The ones that weren't - and weren't she-males - were just standing in the window texting on their phones or playing Candy Crush. It was quite sad to see they weren't engaged in their work.  I just imagine them laying back and checking their email during the act, once they got someone in the door.

The food?  Meh.  We had two good meals, and one was a breakfast. I never want French Toast with syrup again. Fresh fruit and lemon curd for me. It's the way to go.  And while Brett kind of recommended Loetje.  The meal was good, but whatever the gravy was.........incredible!  I found it odd they served a filet with two pieces of white bread, until I used those to mop up every drop of that sauce.

We did try to learn a few Dutch phrases - "thank you", etc. It seemed to be appreciated, though everyone spoke English.

The two late evening we turned on the TV it was like heaven. Sure, some big Brexit news was going on, but not once - NOT ONCE - was the word "BLOTUS" used.  Barely did they even mention the "United States", though they showed the Big Bang Theory.........naturally.

I enjoyed - we enjoyed - Amsterdam.  I'm not sure - we're not sure - we ever need to return. That could change, of course. Lots of other places to see.

I still recommend if you have two days or so, do it.  I'm not sure you really need more than that - unless you're touring more of the Netherlands.

I'd not noticed the omnipresence of smoking (ciggies) in Amsterdam. It's there for sure, of course, much moreso than in England, but Paris was where it seemed to me yet more prevalent. However, that was 30 and more years ago and societal 'norms' may well have shifted, detrimentally.

I twice visited the Anne Frank House (having also read the diaries twice) but this was before the renovations and new tourist-'friendly' facade. On both occasions inside the building, particularly upstairs, I wanted time to ponder and feel emotional but the crowds milling around in such confined spaces didn't allow much opportunity for doing that.

Most of the leather bars, which were my habitual haunt when I was still young enough to get away with wearing leathers, were then on the edge of the main red-light district - not the kind of area where one ought to go to alone, especially with those many dark alleyways in which drug- and sex-trade (both gay and not) was going on. Miraculously, though I usually was by myself, I came through unscathed though having had at least a couple of close shaves. As I say, the main area of gay activity could well have shifted to another region of the city now.

It looks like you had fun. I have been to Amsterdam twice, I have missed a couple of museums so one more trip is needed. You went a lot of places in a short time, but if you had spent a month in London or Paris, you would still leave thinking - I wish I had more time to see it all. Looking forward to reading about the rest of the adventure.

Raybeard - heard about the bars, but didn't go. Maybe we were in the district too early, but it seemed more touristy than seedy. Honestly, I didn't not notice the smoking in the UK that much. Maybe bc the streets in Amsterdam are more confined than UK or Paris, I noticed the smoke there more. We did get accosted by a man after we crossed Damrak. It was a bit unnerving, as for what seemed liked minutes we couldn't shake him.

I am mad-jealous: I would love to see the Netherlands.

Good that you enjoyed one of my ‘home towns’!! I fell in love with Amsterdam back in the mid-70’s as we spent a week there on our way to the US. My first memories were of the hippies...and it was the first time i ever ate a McDonalds!! Needless to say as an adult it was my go-to holiday spot, so was a natural place to move to when I got tired of the US.

What I think is ironic is that we lived in fairly close proximity for many years, and have many of the same reference points.

B., I used to have to cross the Damrak at night to get to my favourite cruisey bars (with their dark backrooms etc) - and the number of times a stranger would pass close by uttering under his breath so that only I could hear, the words "Grass?" or "Coke?" I think the amount of traffic going on in these 'commodities' meant that I was never unduly pestered as there was no shortage of those who really wanted or were desperate to buy or sell at that time of night. Still a bit unnerving, though. With the hindsight of several decades it's astonishing that I survived all those years without once being attacked, mugged - or worse.

Raybeard.....I assume you were either going (depending on direction of travel) to the Web or the Cockoo’s Nest....or Club Jacques, the Stablemaster, or my absolute favourite....the Argos.