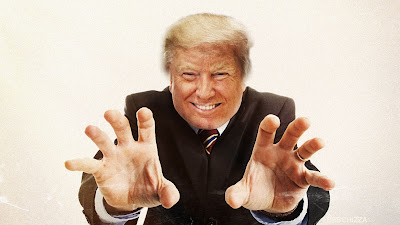 The potentially biggest blogging day would have been this last Sunday - and I had a somewhat set post ready to go, because I knew I was going to be out of town.  Curses!


There is a certain beauty to this entire (t)Rump / Pussy thing.

Sure, you're disgusted, yet not surprised. Not in the slightest.

My anonymous commenter the other day is probably sorry he/she wrote that I insulted them two days prematurely. If I insult your beliefs and Donald doesn't - well, I just am a little bit sorry for you.

Back to the beauty thing:  all the news organizations have used (t)Rump to their advantage for ratings, sales, etc. They haven't held him to anything accountable for what he says or does. He distracts them. So, he's used the news to his advantage too.

Now, with arguably the biggest story of the campaign, and most of them can't (or won't) say the word "pussy" on air, or in print for the more family friendly papers. It's priceless.

Of course, it reminded me of this last season of Veep - with their 'cuntgate' episode.


Never in TV history has the word 'cunt' been said so often in 30 minutes (and a half hour of one of the funniest episodes ever!)  Of course, this was post, yet pre, Billy Bush.....who with this, might be the only Bush to make an actual difference in politics.

Certain GOP members are fleeing like the rats from the proverbial sinking ship. {the rats are less 'proverbial'.} I hear more denouncing him than actually revoking their endorsement. As if revoking it abstains them from puckering up to his Cheeto coloured ass.

What some people - but not enough - get from this entire scenario is that rape culture is alive and well. Hell, it is fucking thriving. It is that kind of "lockerroom talk" that let's judges sentence rapists to three months in prison.....because jail might really ruin their life!

710 was listening to what I call Canadian All Things Considered.  It comes on right after ATC, and it's from Canada, but I've never bothered to learn the actual name. A female caller from South Carolina completely stumped the panel discussing the issue. She said, that if Donald did or said that, it was because the 'women were sending him signals for him to do it'.

Seriously. She said that.

When I say she stumped the panel - they were just dumbstruck by such a backwards comment. There was no logical response. And since Canadians are so damned polite, they couldn't call her a dumbfuck. At least not while the mic was hot.

Donald could learn something from those Canucks.

The second debate itself was painful - on all levels. Hillary included. But Il Douche was really on top of his messed up game:  All the sudden the Humayun Khan is a "hero".   He'll fix ISIS was the answer to the question on his audio rape. Oh - and something about Hillary making the tax codes - which last I checked are laws that being with the House of Representatives. But I suppose knowing anything about that would put him below any 4th grader who has seen Schoolhouse Rock.

I made it through the first hour and I made 710 change it. I could no longer take it.

The day after, a poll of GOP voters said they wanted Donny to stay in the race. Oddly enough, the same day, Obama's approval ratings have never been higher in 8 years. Are these diametrically opposed?

The more painful thing of this entire "scandal"? Fucking Rudy Giuliani.  What fucking cabinet position was he promised for all the butt licking? Rudy said, all Trump has to do is ask the American public for forgiveness. ...and that they always give it.

Well Rude - I bet most of them didn't know you sent your wife divorce papers via fax and never bothered to, you know, tell her.


My big thing with this whole thing though? I more than half-believe Trump released the audio himself. I've said all along he doesn't really want this job, and he is in very pseudo-danger of winning.

It must be tough - he allegedly hates to lose, but now he wants to but can't admit it. That's a theory anyways. But it would not surprise me in the slightest to hear that he sent the tapes out himself.

The deeper in the hole Donny gets, the faster he shovels. We need record turnout and a real landslide. I'll be in line four weeks from this morning.

the rump is a pig!

congrats to cleveburg in advancing to the ALCS!

The leak of the tapes ....thus the birth of #Pussygate ....happened just three short hours after I was reamed by my commenter for my views. Now while my commenter said he was exiting for good, but while he was on the way out he somehow "accidentally" registered himself as a follower of my blog. Trolls, they just can't help themselves.

Sometimes I just hate my state.

I now so totally understand the phrase "I JUST CAN'T!"

That business of the South Carolina woman saying that the "women were sending (you-know-who) the signals to do it" reminds me of a story I heard many years ago when a man was caught 'in delicto flagrante' with, of all things, a pig! Bestiality being then a crime (not sure if it still is here, but it ought to be) the guy's defence was "It was the pig's fault!" Seriously! Needless to say, the judge was NOT impressed.