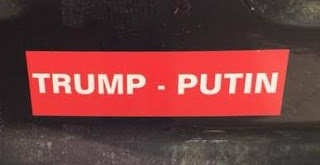 I think I've mentioned that we reside in an extremely liberal neighborhood.

Our suburb is known as being very liberal, and for the few dozen houses in our 'hood, we even kick that up a notch. The one known republican move out about two years ago.

I'd say 'good riddance' but they were actually very nice people, though their dog was annoying as fuck.

As we were walking Shep a few weeks ago, we stopped by our neighbors, Jerry & Molly. We actually stopped over because their dogs were barking to see Shep....so we let them visit.

We moved up the driveway and 710 nudges me to Jerry's bumper sticker.

He nudged me incorrectly, but the split-second of nudge and realization were over by then.

710 saw - as did I - the '(t)Rump' part of the sticker and almost read no further. I got the nudge before he read beyond the dash.

Jerry is a great guy, and no one who would ever vote for Donny boy - ever. So yes, it momentarily surprised both of us that he had a (t)Rump sticker - even though he really did not.

My second immediate thought was: why would you put this sticker on a very very expensive car?

Then I flashed to my friend Morty (as I am apt to do), and his Impala, and the taping a political bumper sticker on his back window.  I believe it was for Lee Fisher.

I admired Morty's practicality of not slapping on an adhesive backed endorsement for something that would be temporary in the big scheme of things. Yes, I semi-privately mocked him (ok ok...publicly) for not being able to commit to adhering it to his car.....that he didn't have full faith in Mr. Fisher.

I put an Obama 'sticker' on my car. Except that it was a magnet. Genius. It didn't hurt the car one bit.

But back to Jerry.

I certainly get the point he was making. But like everything else (t)Rump touches, unlike what was on Jerry's car, it doesn't stick.

Anyone who isn't already voting for Don would smile at the sticker. Anyone who is, wouldn't or couldn't see the possible / probable ties to Putin.

Jerry probably gets the finger from those folks.

I think I taped that Fisher sticker on the back window right after I took down my taped "Dump Bork" sticker.

I too live in a 'hood that leans left. Yesterday I saw my first rump sign a few blocks away. I had never seen one here.

I live in a Blue town in a slightly Blue county in a deeply Red state and I see very few Donald signs.

It warms my heart.

Genius bumper sticker. I wouldn't dare put it on my own car, but kudos to him!

In my new 'hood stands a 20 foot tall homemade banner (bedsheet, no less) that reads, "Trump Save Us and the unborn, too"

We on the other hand live in a very Red area. We don't dare put out political signs lest we are lynched.