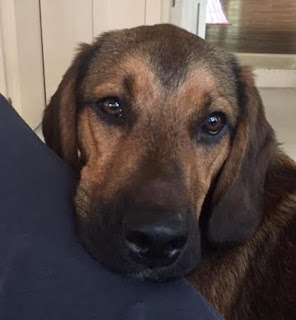 We had a trainer come meet with Mr. Shep.

As you'd expect, he was on his best behaviour, so that was $$$$ down the drain.

Nah - it wasn't. Ann was helpful in helping us with ways to stop Shep from mouthing / biting. She had him responding in less than five minutes. Granted he isn't fully off it yet, but I think we have some tricks up our sleeve to help modify his behaviour.

Ann thought Shep was the most adorable thing. She probably says that to all her client's dogs, but in this case, it just has to be true.

The first meet and greet was more about us than Shep. The wants, the priority, the involvement. But in between, she worked with Shep - then with us - on how to control this mouthing.

He's acted up since - more than he did when Ann was here, but she's a lesbian. Shep is smart. Smart enough not to fuck around on that level.

Ann gave us helpful pointers, ones we are putting to use already - and will follow-up with us, even if we don't select her for our trainer. I think both 710 and myself liked her enough we might move ahead.

I don't think Shep (or us) needs tons of direction, but enough that a pro could be helpful in getting us to where we want to be.

I am hoping before the snow flies, we will have a better behaved doggie. Overall, he's a good guy, he just need to learn his manners.

glad to see he's doing well and you guys are enjoying him. He's just incredibly adorable!

who would NOT fall in love with that face!

I see that face and I say to myself, "Go on, do whatever you want."
I'm a horrible parent!

at all times the dog is training you or you are training the dog. good luck.

He's young. He will get to know you, and you him.