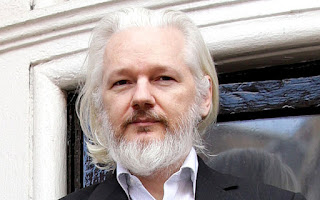 Julian Assange is an enigma.

Remember when he was a "hero" for releasing the files that Chelsea Manning lifted from the US Military.  Ohhhh.......the liberals thought he was the bees knees for letting that information go.

I'm not sure the same liberals are as thrilled with him wiki-leaking Hillary Clinton's emails.

I'll be honest, I'm so fucking over this election, I have not read what the leaked emails say or imply. Nor do I care.

The Dems are so worried about an outsider influencing this election. They thought it would be (t)Rump / Putin and the sway Russia will have over this election and affect the outcome. The Republicans have no issue either way, I presume, as long as someone somehow passes them the actual win.

I know Assange wants Hillary to lose. I don't know if he really wants (t)Rump to win, but that is kind of the outcome should he get his way.

And Assange should be a (t)Rump supporter.....and vice versa. My lord, people seem to forget he's taken refuge in an embassy where no one can touch him............for SEXUAL MOLESTATION!

I don't know what 'pussies' are called in Sweden, but maybe he's grabbing them there.

I do love that during the Wikileaks thing-a-ma-bob, that everyone seems to overlook that rape-y thing because he was fighting the good fight.

I was always on the fence with his actions (including, but not really about the rape thing). He did help get a young military (wo)man sent to jail for 35 years.

So he's winning on that one, Il Douche.


....and lord, what a hard life Mr. Assange must have had. Look at that image. He is 8 years younger than myself. In what world is that man forty fucking five years old?

Song by: Audioslave
Posted by Blobby at 12:06 AM

he's a pig. and a rapist. the ecuadorian embassy should throw him out on the street!

I was about to echo your opening sentence, but WQ above (leave it to her!) tells straight.

He and Snowden are criminals,