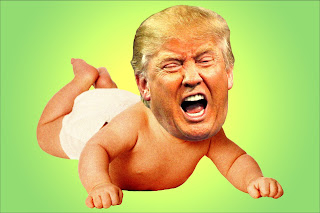 Can someone tell me about Donald (t)Rump's big whine-fest over this so-called 'defective microphone' during the debate?

Yes, I know the debate folks concluded there was an "issue" with the microphone.

Did this mic somehow take his audio output and misconstrue his words, thoughts, actions when they played through everyone's television sets?

Other than - at least on the station I watched - there the audio and video were out of sync by about 1.5 seconds somehow caused by this microphone?

And more - and most - importantly, was there ever a part of the debate where Il Douche not heard? Was anyone holding a cupped hand up to their ear and go, "what'd he say, Alice?"

Everyone heard, and every news outlet printed, each and every word he uttered. Not once did I see "distorted audio" or anything of the like.

Naturally, this entire meltdown, is probably just him and his campaign teeing up on why not to do a 2nd, 3rd or 4th debate.

He should do himself - and everyone else - a favour and just not do them. I know it would save me a lot of angst.

Song by: Janis Joplin
Posted by Blobby at 12:02 AM

As far as I could tell, the real problem with the microphone was what the man behind it was saying.

"He should do himself - and everyone else - a favour and just DISAPPEAR!" - fify :)

I see no point in the debates.