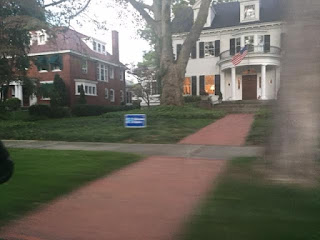 So last night we were invited to a neighbor's house for a political gathering.

I read it as: a discussion about the 2016 election - as Michael is a Republican and his (female) partner is not. The set-up was prefaced with, while he is a Republican, he is voting for Hillary.

I would like to think that Michael & Carol, whom we've known for a decade, wouldn't try to sneak that by us.

Turns out both 710 and I were both right. It was a discussion, but there were reps from the Clinton campaign in attendance. They didn't try to hit us up for $$$.  It was worse:  door-to-door canvassing.

There were a dozen or so folks there: two gay couples (including us), the neighborhood black guy (yes, singular), the white wife of a woman married to a man from the middle east (and I don't mean Indiana).  In theory, it was a good cross-section of anyone the (t)Rump campaign abhors.

Discussion was around the visceral reaction to (t)Rump's looks, voice, manner - and of course, the things he actually says.

Danny - the sole black person - actually was glad for Don for one reason: the reality that racism is thriving in this country. His take is, that just because people kept quiet about their prejudice doesn't mean it didn't exist. He doesn't think the country has come far at all far in terms of race relations and this just proves it. He also mentioned people of colour are city-centric because they - he - doesn't feel safe in middle America. Danny is an extremely accomplished man - so this isn't the paranoia talking.

Other topics were the people who supported Il Douche, and the reluctance to ask people why they were - because they couldn't stand to have discussions that weren't based in logic. I'm just as guilty with that. One of my cousins who is far far far right is voting for him - and I could / would never ask him why. I just don't need the painful discussion.

Oh - and there was wine.  But I only had one glass. I hadn't eaten dinner yet and it would be a half-mile walk home.....except that 710 showed up later, right from work, so he drove me home.

Save the push for canvassing, or taking in out of state volunteers, this is what I love about our 'hood. We have a cohesive group of folks, and it's always been nice getting together with them, though some of them were new to us.

I don't know how "risky" this gathering was. One can assume political affiliation, but it's never guaranteed.

Either way - it was a nice break to the work week of just coming home. We totally used Shep for our getaway though before the campaign lady got volunteer signatures.  "We gotta go check on the new dog".

Song by: Tift Merritt
Posted by Blobby at 12:04 AM

You know we read your blog, right? You weren't fooling anyone with the dog excuse.

I've been reading your blog for at least 8 years now. Usually, when you get political, I skip it. I loved your posts about Petey and I love Sophie. I don't know why you don't do any more cooking entries. I really like those, and I've even made a couple of your dishes. I usually like your music reviews, and I like your movie reviews, but politics is where I have to draw the line. I guess I'm just tired of being insulted just because I have a different viewpoint than you. I may just stop reading your blog completely. I can't think of a reason to stick with it anymore. Shep is cute, and I was surprised that you guys got a new dog so soon. I hope it works out.

Your commenter was much more civil than the one I had last Friday. It's your blog and your right to express anything you wish.
....oh and I thought you waited to long to get a dog but after you ended up with Shep I knew that your timing was perfect.