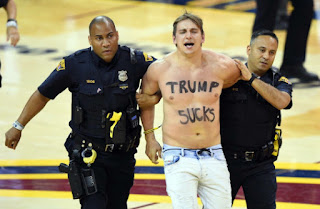 I wonder if Donny (t)Rump has considered a career in stand-up.

All those times here I have pondered why he'd even be running for the top office, none of them making a lick of sense. But a four-drink minimum - of (t)Rump vodka, of course - standing in front of a brick wall, could totally work.

So, with all this sex sexual assault stuff now coming to light, and of course he'd have to be the aggressor, because...ewww, who would come on to him, he's crying foul. It's beginning to sound the they're the Duggars of the Upper East Side.

However, a comedy routine would slay the audience.

The Trump campaign described the entire Times article as a "fiction" that amounted to "character assassination." The Trump campaign told People magazine: "This never happened. There is no merit or veracity to this fabricated story."

......like when you said Ted Cruz' father was in on the assassination of JFK?  Or a birth certificate of a certain black president?


Or his take on the current temperature of the election: "I never knew it would be this vile, this bad, this viscous."  (did he, or CNN mean 'vicious'?)

O.M.G.  He'd have them rolling in the aisles.

Comedy Central would tap him for three seasons of his own show, Inside Donald Trump. HBO would have specials.

My lord, it's like he doesn't have half a mind to recall all the vile, viscous and vicious he initiated...and then perpetuated long after people stopped discussing what he through against the wall. It is like the man has some special Tourettes that no body can treat.

All those Bill Clinton / sex stories, of which we've known, and of which Il Douche won't stop reminding us, I believe, if my recollection is intact, we were told by the Bill Clinton team:"This never happened. There is no merit or veracity to this fabricated story.".....or something of a similar sort.

I think Bill Cosby's PR folks have had similar disclaimers.

We've all been around the block enough to know, that because the would-be (but won't be) prez says it, doesn't make it true. I have yet to hear a politician at the initial point of accusation actually come out and say - "yes, I've been fucking her / him".

Standard Operating Procedure is always denial, then blaming / accusing the victims, then the press, until the truth finally reveals itself. While he likes to think otherwise, Donny is no different than your average perverted politician.

So perhaps maybe after November 8th, when he has some free time on his hands, before his court appearance for (t)Rump University being, he can throw his name in the hat for Open Mic Night down at the local Chucklehut.

Personally, I think the nut has syphy..siphyl.. uh, a brain eating S.T.D. (Stoopid Trump Disorder). Lately, I've been having a hard time eating oranges *sigh*. I never can remember how to spell the v word, but sometimes nothing else works. Have a lovely weekend.

Can I have the number for the shirtless dude that is being escorted out? I'd like to thank him in private if I may. Consensually of corse.

I'm getting full on Cosby from Donald these days; it's eerie. Next thing you know he'll be wearing vibrantly colored sweaters in which he delivers his hate speech.