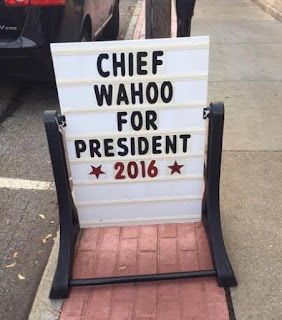 It's been a few tense evenings around Casa Shep.

Game 3 of the World Series had my stomach all in knots. I find having scoreless inning after scoreless inning to be gut-wrenching. The longer it goes on, the smallest infraction could mean a loss.

Safe to say, there were lots of sighs, yells and curses from yours truly - mostly in the bottom of the 9th. Two on (for the Cubs), two outs and us winning only 1-0. The margin was too thin.

Ruckiry (not Jon's boss), we eke'd it out and I went to bed well after midnight. Praise be it wasn't a school night.

Game 4 wasn't nearly as strenuous for me. I can't say the same for the Cubs.  BIG win for the Indians. It erased my angst from the night before.

The WIndians lead, 3 games to 1.  I am GIDDY.  All we need is one more win for Blobby to be headed downtown to a parade and celebration. I didn't go to the Cavaliers victory bash, mostly because I didn't care  - - but this is the Indians !!!!!!

I do have to say, I felt bad for the Cubs fans during last night's game. They look so dejected. I would (kind of) be ok if we lost to the Cubs - more so than any other team. But I won't lie - I REALLY want us to win.

And none of this World Series stuff is as strenuous as it is for Hillary. Or possibly the director of the F.B.I.

So close to the election and this turd of a news story comes out - more emails.

The F.B.I. is as fucked up as the media on this. They both skew such a (non?) story.

Snore.  More of what, exactly?  Oh that is right - they don't know. Or they do, and are just baiting the public.

In reality - if these emails to Weiner's wife are anything of substance (or even if they weren't) - they came from or went to Clinton's email server........which the F.B.I. already had. So aren't these actually duplicates that they've already fucking seen?

Sure, the F.B.I. finally stated that they did not 're-open' the case, because it was never closed, but the damage was done. The general public believes there is on-going criminal activity and a new investigation - 10 days prior to the election.

This is one time (t)Rump doesn't even have to do anything. He can just ride this new cycle, which should take him to Election Day.

"People" are calling for F.B.I. Director, James Comey, to be discharged. It might be right. It might be wrong. But if Obama or Clinton (should she be elected) do that, it just seems retaliatory. Not a good way to end, or start, and administration. It's extremely partisan - and you can dress it up anyway you want to, but you end / start on a sour note. Even if he resigns, it will be deemed as "under pressure".

This entire election has been one big cluster-fuck. Honestly, I'm so fucking tired of both of them. Less of her than him, but she's not that far behind. Donald is a buffoon of course, but Hillary keeps touting 30+ years of public service and political know-how. Then why is she continually stepping on landmines?  She should be smarter than this. WAY smarter.

oooh. I sound so butch.

Can't wait for it to be over.

Just for you my dear I'll root for the Indians today. That way at least I'll be distracted from that other mess.

I'm imagining President Clinton's first meeting with the FBI director might be tense.

I admire your courage to watch the games. I get too wound up in the major games to enjoy them
I haven't watched the UM vs. yours in years as there is not enough valium to calm me down.