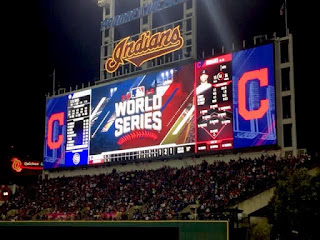 (that's why this is getting posted later than my usual posts - the game went until almost 12mn.)

I wasn't purposefully holding out on telling you. I just wasn't sure.

I know last week I said I would love to go, but couldn't even afford Standing Room Only......and I can't. Well, I could......I just wouldn't. My friend Phyllis mocked me via text going, "$1600 vs a being part of the historic two championships in one year story......PRICELESS"

And it is. But her text-mocking didn't get me to fork over the dough.

As it turns out, one of the lawyers my mother previously worked for has been good to her. While he left town long ago for other career options, she and my father (and 710 and myself) have been the recipient of his generosity and / or connections.

When Bill worked at the White House - we got private tours of the residence, West Wing and the OEOB. My parents attended the 1996 DNC convention and attended the inauguration and one of the balls - in what is now the Trump Hotel in DC {shudder}.

And I've been to more than one Indians game  - front row, behind first base, thanks to Bill.

While Bill has been gone from Ohio for at least 16 years, for some reason he's kept his season tickets.

And while he certainly wants to attend a few World Series games, he cannot attend Game 1.

Those two tickets were offered to my mother. And while I think she'd like to attend, being almost 88 and the game starting after 22:00 (she's not supposed to drive after dark) and a planned temp of 40 degrees, she passed along the tickets to 710 and myself.

In a way - this was a problem. Right next door to the Jake (I still refuse to call it Progressive Field), the Cleveland Cavaliers weren't just having their season opener - but it was the Ring Ceremony for their 2016 championship. It was to be a huge crowd downtown for sure - if it was just one event, but it was two. 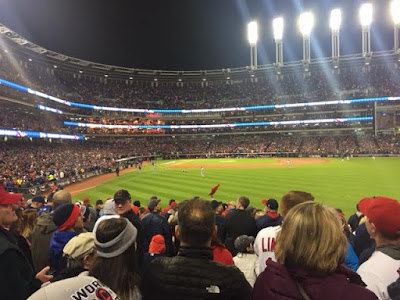 The game itself - if you watched - was incredible. Well, the first inning was. Then there was a lull, but I was surprised how many people wanted to sit and for lengths of time. It's the fucking World Series. I felt the need to be on my feet.

Seventh inning was a slight nail-biter, where in theory, Chicago could have tied the game, but long story short: they didn't. Not a run for them. And the eighth inning was just pure joy. I've never high-fived so many people, let alone strangers, in my life.

The crowd was a mix. People who had tickets, but clearly could care less about being at the game vs being at the World Series. The guys a few from us never watched a thing and were both playing with their phones the entire time.

The guy in front of us - video later - was what would be the crazy drunk uncle who yells, "You bums" at the tv screen.....except he was in his early 30s and doing it real-time. Some of this comments were funny - some fell flat.

The girl next to us was annoying as fuck. And not just because of her ugly-assed septum ring. Partially because she smelled of lots and lots and lots of banana peppers. But she had a horrible high pitched scream and she was trying to trash talk some players. Ugh.

As 710 said - "can you imagine your mother sitting here during this?", meaning these two mentioned, plus their plus ones.

Yet everyone was super friendly. Some guy behind me asking if I wanted a beer. I think that was code for: 'I've got a room at the Residence Inn', but I wasn't sure. He wasn't my type and oddly, I didn't drink at all. Not one.

Good thing too. If you had to pee, the lines were forever to get in. But I did eventually, and wouldn't you know it, I ran into one of my cousins who was in from out of town there. We both did double takes, did our business and caught up outside the restrooms.

So now it is time for bed. I'm considering working from home today. I'll decide when I wake up.

Song by: Chris Isaak
Posted by Blobby at 1:08 AM

congrats for taking the first game. but, speaking as a national league kid, GO CUBBIES!

A witness to history

So happy you two got to go. And such a great game!

Wow! What a Score!
Congrats! I'd love to see my Padres in a WS, or just even attend one.
One day I will.
In the mean time, Go Cubs! (Sorry but I'm a National Legue guy....)