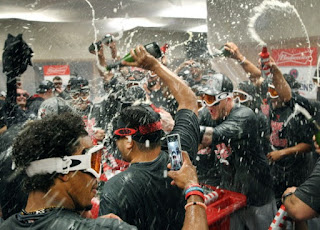 Yes. THAT many exclamation points. Deal with it.

For the first time in 19 years, the Indians are back at the championship level. I could not be happier.

Growing up, I never thought I'd see the Cleveland Indians in a World Series. Now I've lived to see it happen three times.

The regular season was somewhat anticlimactic. We were in first place since June and stayed there through September.

I'm not complaining. We are usually more up and down. There was always a reason to check the standings in the daily paper. After a while, though I did it, there seemed to be little point.

Post season was fun. We swept the first set of games. And had it not been of a horrible horrible game 4 in the American League final, we could have swept that series too.

While it would have been fun to win and home, I wasn't broken up about that. Hell, we didn't even win in this country! A win is a win is a win. I'm ok with where it was.

My ticket that year - from a broker - was $330. It started out at $200, but I kept hanging up after blanching at the price. Every 15 minutes, it kept going up. I finally just folded and bought two tickets.

Mind you - that was almost two decades ago.

Tickets for this series?  Standing Room Only starts $641.  Starts. There are actually more expensive SRO "seats".

If one wants to put their cheeks in a seat, those start at the $800+ range. ...and those are the upper upper deck.

....and if tickets are $800 from the box office, can you imagine what a broker will charge you?

I can reassess as we get closer. Maybe someone has to get rid of a ticket or something.

I guess I'll just splurge on a t-shirt or something.

I'd have to really look, but I'm not 100% sure there is a city where two of their major sports teams have won championships in the same year.

2016 has brought the title for the Cleveland Cavaliers and the Lake Erie Monsters (an AHL - not NHL - hockey team). We have the chance for baseball too.

As always, the Cleveland Browns are total losers.....so there is no way to capture all titles.

I'd say I don't care if the Indians win the Series or not, but I do. It was a right of passage when you were 11 that they'd end up in last place. And the 'maybe next year' for me is ticking down. Sure I'm only 53, but my time is running out.

Song by: Suzy Bogguss
Posted by Blobby at 12:09 AM

Congratulations!
The seats will just increase in price from here. We just had the All Star game here and I know what I sold my seats for and I "dumped them" at the last minute due to my surgery. Watch it from home. When we finally get a series, I'll be there in my seats.