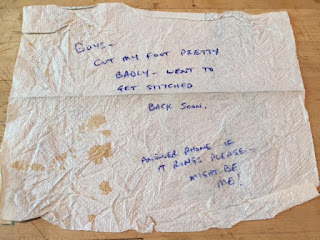 Why the fuck not indeed.

When we arrived, as we climbed the external staircase to the third floor, we looked down at the once pristine white steps to see blood.

Not Nicole and Ron blood.  Not Rosemary and Leno LaBianca blood. ....but still.

As we get to the doorway, there is a note attached.....also splattered with blood.

Poor David G. - he was so pained by a potential visit with me, his cutting got out of hand.  And foot.

Without getting into detail - it was one the odder vacations I had ever had. It had good moments, of course, but I would venture to say, life-altering ones for everyone under that roof for that week. Well, on the third floor.  I don't know if anyone on 1 or 2 had any shake-ups.

The one thing that was not altered was David's and my friendship.

What started out as odd - I mean, who becomes friends with someone during / after a random 3-way ?(ooops, I've said to much!) - became one of the strongest relationships of my life. And who the fuck maintains a friendship based on that?

We've lived through moves, pets, boyfriends (mostly his), husbands and he went with me to go see Madonna. If that last one isn't a true testament to friendship I don't know what is.

I met David in New York City. I've visited him in P-town, Princeton, Palm Springs, San Diego, New York City (again), Las Vegas and Phoenix. For an all-to-brief period of time, he was in Columbus the same time as myself.  I have yet to see him even remotely near Cuyahoga County.  Or visit me anywhere (though before he lived in Vegas, he did fly in to see me there - so I'll give him that).

I'm not saying I put more into this relationship than he does - but I totally do!


710 actually saved the foot-cutting note. Packed it and trekked it back to Columbus and put it in some file and some 26+ years later, which he dug out a few weeks back.

Today is Davey's birthday. He will get a call from me. He will laugh at me and be mock-annoyed. In 30 odd years, I've never missed calling him on this day. I don't see why I should start now.

May his birthday be injury free, and filled with laughter.

Friendships aren't always equal.
Once we realize that, as you have, friendships are free to be enjoyed for what they are not for keeping score.

A rather grisly 'keepsake' - though only for the nicest of reasons. A happy one to Davey.

First of all, let me say that I OFTEN have called you on or near your birthday, often in the correct month. And sometimes many many days or months before just in case, which should earn me extra credit. Because anticipating your birthday is much better that just hitting the correct day.

We remain friends because Blobby is the sweetest, funniest, nicest, weirdest, bestest guy around. Plus he likes to hang around me cause he gets to be the young pretty one.

Thanks for your call this morning my friend. It's always the highlight of my birthday. Even though I hung up on you today! Another serious work emergency (working at Michaels, you can only imagine how serious a work emergency must be. Glitter spill. Bag of googly eyes exploded. Like that.)

Most of all, I love you exactly as you are, flawed yet perfect. And I know you feel the same way about me too. Very few people accept one another exactly as they are. But we do!

Here's to another year of me stressing out about forgetting birthday 2017, and knowing that you SMUGLY will never ever forget mine. You are the best!