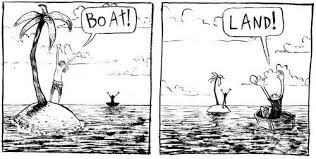 I rarely ever comment on comments. Today I feel the need.

Yesterday, an anonymous reader said they didn't care for my political posts. They were tired of being insulted because of having different viewpoints as myself.

Now - I am absolutely fine with people having different opinions than my own. I'd like to think it's ok that I have a different point of view from someone else.

I get that yesterday's post might have been a last straw, but going back to read what I wrote, nothing is insulting as far as I can see. I talked more about the general unease of an African-American neighbor in today's society that he sees as being racist than I did about any specific political anything. I talked more about having wine then I did about (t)Rump himself.

What struck me as ironic is the 'insult' comment.

Trump has built his entire campaign - nay, life - around insulting others. Granted, he is an equal-opportunity insulter - unless you're a rich, straight, white male (and not even all of those are safe). He is an agitator for agitating sake alone. He is more carnival barker than provocateur.

The comment - right or wrong - struck me as being thin-skinned. Not so ironically - so is (t)Rump himself. It's doubtful he's ever taken or given constructive criticism. From all I see he's reactionary more than a processor.

I said I was fine with a difference of opinion. Fine. Then I don't want supporters coming at me with insults and braggadocious comments. If you want to have a logical, thoughtful discussion, I'm all for it. I will be the first to admit I'm wrong if - and only if - you can articulate (t)Rump's plans using his words, his actions. Not "what he really means is.....".

If you support (t)Rump - even if it's just for his fiscal policies - you can say you're not racist, but you at least have to admit you're supporting a man who is. You have to face the fact that, by proxy, you support xenophobia and misogynistic behaviour - even if it's on the periphery. You can justify it all you want "it's not" or "he's not" doesn't make it so.

(t)Rump might be all talk. Perhaps he doesn't mean the things he says, but now he has a fuck of a lot of people behind him who do - and act on it. You can say you're not "one of them", but it's a little hard to separate yourself from that pack.

Of course, I don't like losing readers. But I also don't see changing my blog for a few dozen posts I write per year that are political. Many don't like my music choices or the food I make - I stopped trying to please everyone a long time ago.

I dunno, to me while there are a few selfish reasons for writing a blog (personal growth, improving your writing skills, developing discipline, becoming a minor celebrity) for the most part it seems like a giant pain in the ass, especially committing to a meaningful daily entry and sharing so much of your private life.

Because they are so much work, your blog entries are a daily gift to us, your readers. Anyone who doesn't want that gift doesn't have to accept it. End of story.

While it's nice as a writer to get feedback, and certainly our prerogative as readers to give feedback, this sniveling whiny bitching about the specifics of your blog are just bullshit. If I were you, I would find these comments very depressing and not particularly helpful.

In short, Anonymous seems like a douchebag. That is all.

anon can just ignore the political posts then. is THAT so hard?

Um, it boils down to the fact it's YOUR blog and you'll write what you want to.

This, though:
"If you support (t)Rump - even if it's just for his fiscal policies - you can say you're not racist, but you at least have to admit you're supporting a man who is."
Says it all.

This is going to sound really simplistic, but what the hey. I don't shop at T.J. Maxx. Now hear me out. I am weight and age challenged (okay, fat and old) and I like to wear clothes that don't look like tablecloths from some bygone era. Simply put, stop bitching and shop somewhere else! I appreciate your views whether I agree with them or not (that music thing) because I learn stuff. I would still come here even if you had decided to keep calling Il Douche Donna :) To paraphrase an old Isley Brothers' song: it's your blog, do what you wanna do.

I admit I avoid politics as it brings out the nasty comments.
Good for you for staying with the goal to write what you want. If people don't like it, they can either go away or come back some other day.

I'm saying hello just in case you thought it was me. By the way I do shop at T K Maxx.
JP

If we went through life pleasing everyone else, would we ever be true to ourselves?
If there were only one side to a coin, would the coin even be able to exist?
We all are different and unfortunately "Anonymous" isn't seeing the beauty of that.
Hey, at least you put your name to what you say.