I'm Not Calling You a Liar 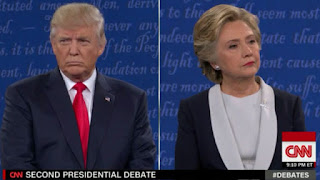 Those seem to be the hashtags from "the debate" that anyone is talkin' about.

I was still riding a high from the Indians game, which ended about two hours before the debates. I was not plan on watching, but as we flipped through the 187 channels, 710 stopped on the last televised fuckfest with "those" two.

I believe we made it through two questions - one being about immigration and that damn fucking stupid wall. The other was much much much more painful: Abortion.

Since I pretty much refuse to read almost anything that has Drump's name in it, I don't know to what those above hashtags actually refer, though it doesn't take a Mr. Peabody to figure it out.

No, the uncontested answer of Drump to abortion - by Clinton, or that stooge, Chris Wallace - was simply ah-mah-zing.

He stood there and said about late term abortions, that "they" could "rip the baby out of the womb", one, two or three days before it was to be born.

Drump used the word 'yank', 'rip' and 'tear', trying to make a point about the procedure. Clinton did a fair at best job, trying to invoke it is not the government's place to tell a woman what to do, or about how horrible a choice it is, but still should be the right.

What she never touched was calling him a fucking liar on national television.

Ok, maybe in some obscure third-world country - like Alabama - they do, but not in the U. S.

Usually, the latest late term abortion is at 22 weeks. It's not pretty, it's not nice, but it's also not at a whim of 'I just don't want the baby' either. Usually that late in the term, it's a clinical reason. And Clinton is right - it is a horrible decision to make or to do.

I get that the debate is to be somewhat civilized. I get that abortion, 45 years after Roe v Wade, is somehow still controversial, so someone who is pro-choice can't focus too much on actual abortion. And she deflected to the expected position of Planned Parenthood and all the other services they provide.

What she didn't do was call him a #liar.

Yes, there are many ways to do it without saying the word "liar", but he is and was lying - and zero to back it up.

Here within lies the problem - with Clinton and the media: they don't truly call him out on this shit. And unfortunately, what he says to the fucking 'tards who are voting for him believe the shit that come out of his mouth.

Once the debate is over and the fact checking starts hitting the intertubes......well, it is just too fucking late for facts. The damage is done and the few Drump voters who can read, aren't.

Nor did anyone call him on his Supreme Court "automatically overturning" Roe v Wade.  .......that's not exactly how the Supreme Court works. But Judicial, Executive and Legislative mean nothing to this man. A case actually has to make it to the court. It's not an executive order.

So we made it through two questions, and then it was to the DVR to see stored America's Test Kitchen shows that are backing up.

I'm pretty sure I've said it before - besides not being able to tolerate what he says, honestly, it's his f'ugly facial expressions, especially when Clinton is talking, that are such a deciding factor in his toxic personality.

Song by: Florence + the Machine
Posted by Blobby at 12:14 AM

the rump always looks like someone just punched his fugly face. or he's taking a dump. or someone called him a liar. he NEVER smiles.

I refused to watch because when he speaks I fear my head will explode.