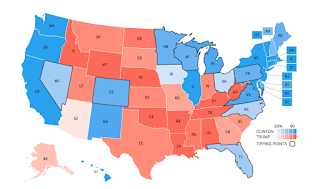 For all the scariness that (t)Rump might actually win, I keep forgetting one thing: Nate Silver.

Back in 2012, Silver was modeling all the races - Presidential, House and Senate. When it comes to statistics and and predictive modeling, the man is somewhat of a savant.

Silver's model had correctly predicted the winner of every one of the 50 states and the District of Columbia !!!!!

You might want to read that line above again.

And now take a big sigh of relief. Unless of course, you're one of the Deplorables.

In 2012, that was all 435 House of Representatives up for reelection. 33 Senate seats up for grabs. And of course, 1 Presidency.

469 races - and he called every. single. one. of them.  C'mon!  That is fucking impressive, by anyone's standards.

So off I trekked to Silvers' site: FiveThirtyEight.

538 is the number of electoral votes.  270 is what it takes to win the presidency.

You'll see at FiveThirtyEight, that there are a few headers - including Sports, Culture, etc.  I was only interested in the Politics tab.

On there are a lot of articles, but I went and clicked directly on the map. Considering Nate's history, I was automatically relieved.

So what is all this shit in the media's polls about anywhere from a 3-7% lead for Clinton? Even the Ohio portion (if you click on that state), has a 20+5 of taking our Electoral votes.

Donny can melt down all he wants - or not. I don't think it will change the outcome of the election.

Only three weeks and two days to go.

That said - just because Nate Silver predicts such a sweeping victory, it's still important to vote.
Posted by Blobby at 12:04 AM

RAMEN! to NOT vote should be a crime!

I'm on Fivethirtyeight daily. The numbers change several times a day and aren't always this positive. You are correct as this is not a time to rest, it's time to work and vote. Three weeks is still a ways off.

Fascinating
This gives me a bit of hope.

I hope there is a big turnout and the Dems control the House.