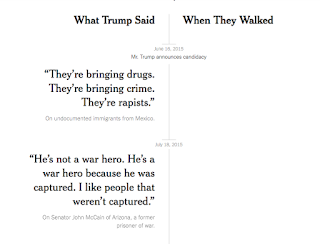 It is twice in a row now that my Site of the Month is the New York Times.

It's really just a timeline, but a fun one. Well....a politically amusing one. How about that?

Said timeline tracks things Il Douche has said and when 110 (and counting) Republicans said they won't vote for (t)Rump.

The link is here.

We've seen and heard that things that "man" has said, but I think the biggest surprise isn't that people have bolted from his presence, it's the moment(s) they did it and what that tipping point was.

(t)Rump's praise of David Duke and attempting to humiliate the Khan family are the two biggest lifeboat moments for most of the GOPers.

I'm not sure there is a Carpathia coming to save them.

It would be nice if the NYT would continue to track this, but it seems they stopped in mid-August. Maybe all that's left are the hard-liners who have nowhere to jump.  .....except off a cliff.....and I'd be ok with that.
Posted by Blobby at 12:06 AM

Email ThisBlogThis!Share to TwitterShare to FacebookShare to Pinterest
Labels: News, Politics, Site of the Month