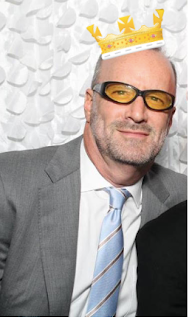 It's good to be king.

Another Emmy awards show come and gone. Another nick in the already fragile fragile friendship of Blobby and Magic Mike XXS.

We're hanging by a thread, people. A thread!

Mr. Mike called me a 'chicken' - well, kind of - and this is that thanks I get for playing.

He was traveling westward (ho!) so we couldn't live chat through the broadcast, but he messaged me here and there. I think he was very very very upset about the death of Leisel Von Trapp - though he'd never admit it.

Many-a-time, in these contests, Mike and I tie....or are at least close. This time?  I wasn't even in the same solar system, let alone the same orbit.

Granted, I went with what I wanted to win versus what I thought would win. It's not an excuse, you can check my last Friday's post. It said so right there.

Mike went in to win.

It seems he's all about strategy.


I can't spin this one. Let's face it - this was a humiliating loss.

I mean, this is a Dukakis loss. A Mondale loss. A Susan Lucci loss. (I had to use that last example to put it in a context that Mr. XXS would understand.)

Maybe I should have insisted on doing all 113 categories. I might have stood a chance.

It seems some sort of baked goods are coming Mike's way.

I'm a man of my word, and he knows it. But we never said a thing about timing. The job has been busy lately, and our new addition (not New Edition, Mike!) might keep me busy until I have time this weekend to bake.

He will see something coming his way next week.

Song by: Dwight Yoakam
Posted by Blobby at 12:05 AM

Well it seems that your sense of humor and humility are intact, unlike your prediction skills. To be fair, I think it was my turn to win. I was so very weary of baking and wrapping and sending sweets...it will be nice to be the recipient of some sugary goodness this time around. You had better start doing some research now for the Golden Globes. Don't want you to suffer a humiliating loss two times running.

PS: i look good in a crown. Really sets of my Bono sunglasses.
PSS: i truly wonder what would have happened if we had bet on all 113 categories. Probably would have taken a few weeks to tally and re-count.