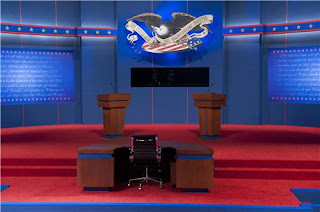 FYI - I'm writing this before the first presidential debate of 2016.

I'm not 100% sure I won't see some of it, but Pitch Perfect is on tv (again) and so is a Parks & Recreation marathon.

....oh, and it seems like total insanity to watch.

Ok. Update.  I turned it on for the question on taxes.  Two minutes of (t)Rump and I understood nothing of what he said. He was so all over the board, I could not comprehend a thing he was saying.

This is right up his follower's alley.

Oh - and he interrupts constantly and Lester Holt has no control.

Clearly, (t)Rump's advisers have told him to blame everything on Secretary Clinton.

I lasted all of 12 minutes. It was so incredibly painful. I would like to say Hillary really shone, but in that 12 minutes, she did not. She laughed out loud at Il Douche - and rightfully so - but she wasn't exactly what I would call 'strong'.

It's nice that someone cares about me.

"They" predicted an audience the size of the Super Bowl watching this travesty. No one I knew admitted to say they were watching it - though if Facebook were to be believed, they were all watching it.

Becky "invited" me down to Columbus for a fundraiser with the one and only Lance Bass.

For whatever I don't think about him as a musical artist, good for him doing his Stonewall / Presidential debate viewing thingy. Use that fagdom to good use.....though I really don't know what kind of folk he would draw. Zach Klein probably has a bigger draw.

But that's ok Lance. We'd sneak to your VIP room to see if the Barden Bellas win nationals of the ICCAs at Lincoln Center.

I watched it all, and it was glorious to see The Rump such a mess.

In my entire sixty years of life, I never would've dreamed I'd be yelling from another room to my hubby " Honey, switch back to the football game! That Douchebag's voice is making my ears bleed!" *Sigh*