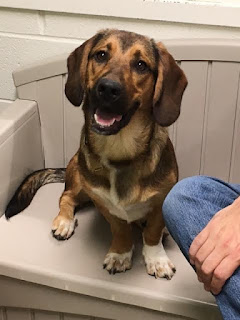 We took the dive and now have a new dog.

You read briefly about Gaston two weeks or so ago. He got adopted right away. Save for seeing him in the shelter, we never even got a chance for a meet and greet before he found a home.

Friday morning, I got a text from 710 saying he was back at the shelter.  Hmmmm.

I called when they opened and an elderly couple brought him back due to his energy level. It seemed odd, as Gaston was so docile in the pen.

The boy likes arms and hands. He wraps his mouth around, but he doesn't bite, still it's not something we are, or want to, encourage.

We spent an hour or so with him. He was fascinated at the other people looking for animals. He settled down a bit. He played with a toy, after being presented many. It seemed like he was excited and had to go out - the rescue staff came with us, but let 710 and myself take him for a walk, where he did indeed pee.

After we were back in, she left us alone, and then and there we decided to take Gaston home. Just then there was a knock on the window. One of my sisters had shown up. She knew we were going, but as they drove by, saw my car and stopped in. She and my brother-in-law loved him too.

As 710 completed the paperwork, I took Mr. Gaston (name to be changed) outside for more walks and pees. 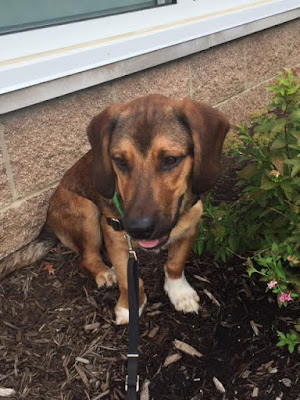 In no time at all he had made it onto two chairs and the sofa, via the coffee table. 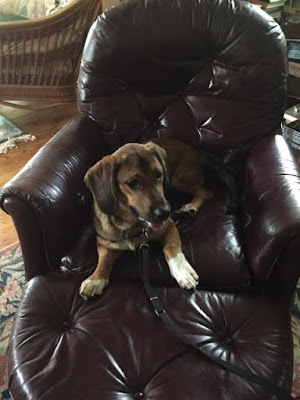 My mother was correct when saying that my father would have loved this. He was always down with having the dog on the chair next to him.

After a short visit, it was time to head to his new home. While 710 set up the crate, I kept Gaston (name soon to be changed) outside and took him on his first neighborhood walk. Along the way he met seven of his canine neighbors and played with three of them - wildly.

He was big on the Rhodesians.....and the boxer (not pictured).  The bigger boxer was submissive for Gaston (name soon to be changed). 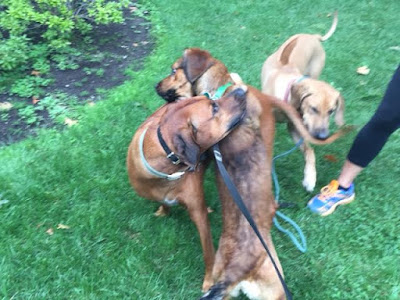 This might have been the first time he had ever truly been off leash. He was in his element, and Eleanore was loving having a friend.

He is very much at home. He ran between completely hyper and out-like-a-lite. More of the former.

Sophie so far is pretty much MIA.  She showed up once when he was kind of out, but he saw her and took off after her, but she was far far faster - and we haven't seen her since.  I think she'll be fine....in a few days. I just don't know how he'll be with her. Play is fine. Biting is not.

He's pretty good on a leash. He seems to be hanging with 710 which just fills my heart. But we will have to do some formalized training with him.

There will be more to come, clearly. But it all worked out - and probably with the dog we really wanted.

What a wonderful addition to the family. We can see that he's going to capture hearts all round, both human and doggie ones. He's so lucky to have 'found' you, and we look forward to reports on his socialising progress accompanied by plenty of visuals. Glad you've now got an extra, very positive, dimension to your lives.

Yippee! Congratulations! Can't wait to read about your new adventures and, of course, many Gaston (name soon to be changed) photos!

he's a cutie! hope sophie and (name to be changed) get acquainted. many happy times ahead for your new furkid!

Gaston-Name-To-Be-Changed is absolutely adorable! I kinda think he and Sophie will wind up great friends once he realizes he moved into her house!

Beautiful! I think Changed is a good name for a dog, heh.
Deedles

Wonderful news! Congratulations. Looking forward to seeing more and more of him.

Welcome to the family, OG.

Love the pictures, and it's great that you have another warm and furry addition to the family. You could name him 'Spot'....then you're standing on the back stairs yelling "Come, Spot!" :)

OMG he is absolutely adorable!! I'm so frickin' happy for you guys. I actually got a little teary reading this post. Congratulations on the new addition to your family. :-)