No One Knows My Name 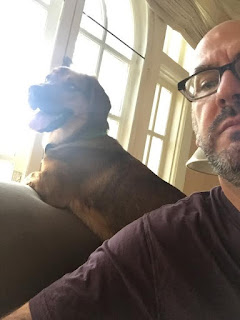 Here we are - five days in and no name.

How can this be?

There is a game we used to play called Non-Sequitur. One person would say a word (i.e. "labyrinth") and the next person had to choose a word that had zero association with the previous word (i.e. "pork").

That example is actually a real life example. Morty stopped the game cold with his response, as we could not stop laughing long enough to continue easily.

While that worked, what usually happens is you cannot help gravitating to an associated word and then someone could debunk your response by making an association to the first word.

This is how it is with dog names. Association.

You can't pick the name, say, "Bernie", without someone thinking Sanders or Kosar. You gravitate to sports rosters, iTunes liberry or IMDB. We've rejected most every selection we have come up with. We have had a few front runners, and we will go for a walk or something trying it out. Usually this is the litmus test on if it feels comfortable.

We have considered and rejected Gus, Bernie, Buster and Lil Sebastian.

We have rejected a lot more than that. Ones we don't even try out - there are enough animals named Tucker, Cooper and Max. There are a few we have in our back pocket.

People ask everywhere we go. I get two emails per day from my mother: "what's his name?"

As you start to think of names you start ruling them out: someone else has that dog's name, or you hated someone with that name in high school, or someone reminds you "a serial killer had that name".  .....I'm just throwing out examples.

Still, I totally get why expectant parents don't discuss potential baby names. The raised eyebrows or the furled forehead when you make a suggestion they clearly do not like.

This has to end though. How will he ever know his name or what we're calling him if we just can't choose?

Song by: Gillian Welch
Posted by Blobby at 12:11 AM

Ummmm.....have you considered naming him Gaston? Just sayin......maybe names happen for a reason.

Congratulations whatever you do, he's very very cute!

Once we called a very beloved cat "Das Tier" (the animal) b/c we were not able to find a name.

Gaston obviously feels at home, staying already at the sofa.

Lucky
Not a name that I normally would pick but for some reason it comes to mind.

I feel for ya! Naming a pet is hard. The nine year old Bichonpoo we adopted is named Bella. Not a name I would've chosen, but what can you do? She's used to it. I, however, can never remember her name. Maybe it's age, or the name just doesn't suit her. We just call her The Bitch. Hey, it works :) You can always name the pup Essobee.

My brother had a hairless cat. He named it Scrotum.

He looks like a Chester to me...and he's lovely.