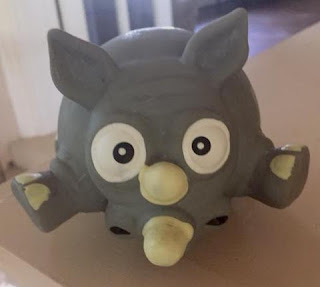 His name is Shep.

It took 5-6 days to choose his moniker, but that is what we landed on.

He's still learning his name, but to be fair, we're still trying to remember to use it consistently.

Shep is quite quite comfortable at home - but we are still learning things about each other, and I assume that will go on for a while.

A few days ago, he seemed to get separation anxiety at night. LOTS of barking. And for long periods of time. And the man has a formidable bark.

He's had a few "accidents", but that might be on us. We are still figuring out his signs of when he needs something. Mostly he knows how to hold "it" and we do ok. When he settles down, he seems to be ok with the crate....at least when we're in sight.

Shep gets his 05:00 walk every morning. The dog walker does the afternoon walk. And then 710 and I usually do the evening walk. So Shep is getting his exercise. He's a good eater and while the rescue place said he's "food driven" he really isn't. At least when compared against Petey.

We try not to compare too much. One thing that is different is the hearing. Petey could hear - until the end - but chose not to a lot of the time. Shep? He. hears. everything.

And the boy is wicked fast. He's a puppy.

Petey was not a toy boy. He had none, because he rejected them all. Shep? He's a fan. At least of some. The one in the title image, the rescue place sent us home with it, as it was his favorite....and it still seems to be, though we have bought and received (thanks Dith & Norman & pups) ones that he plays with. Some days our sun room looks like a battlefield of dead toys.

But you didn't come here for a history lesson - though I'll throw shit in now and again - you came here for pics. So let it be written, so let it be told. 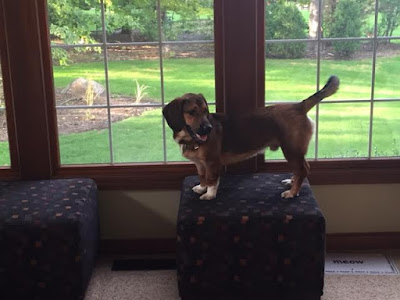 He loves furniture. He got on every single piece of furniture my sister owns. He's a long boy. Bassett (legs and length), Beagle (ears and tongue), Shepard snout. The bark goes between Shepard and bassett. 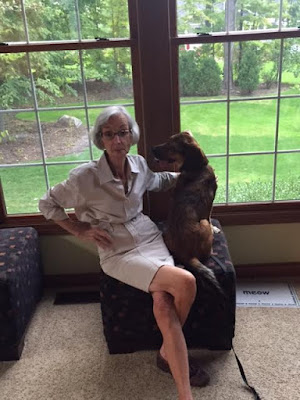 My mother hanging with the pup. She adores him, and vice versa. It's nice to see. 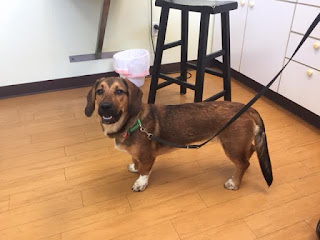 Shep at the vet. His first with us. The vet techs came from the other building when they heard we were there. They all wanted to see who was the "new" Petey. They all loved him - and he bestowed a lot of affection on them.

He's in good health, though we are checking for Lyme disease. Normally, I'd have said 'no', but we have a lot of deer in our yard. 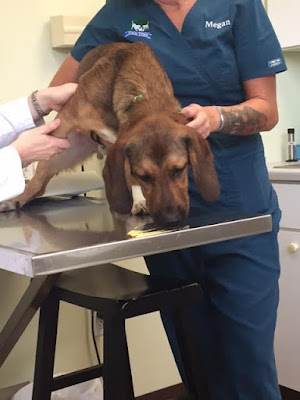 There was the blood draw and the thermometer up the butt, so they distracted him with cheese whiz on the table.

It has been a good first week, and Shep is home.....and he immediately felt like "the one".

We have some work to do on Sophie interaction. She tries. He chases. This is going to take a while.

Song by: Garth Brooks
Posted by Blobby at 12:04 AM

well, shep...nice to meet you. such a handsome big boy with a deep voice!

your mom is beautiful.

Hi there, Shep - and what a little beauty you are, with such a macho-doggie call. Looking forward to seeing (and hearing) lots more of you over coming times. Go careful now, son - and be good.

Well, of course, who could resist! Shep has landed in a pot of jam. He got the best gig at the shelter that day. And props to the older couple who realized it was out of their element and wanted it to end well for all.

Congratulations all of you! may there be many years of loving each other.

Fantastic name.....and great to see he's starting to conform you to his needs and whims :)

Looking forward to seeing more and watching him grow up with you guys.

Sheep is a handsome boy.

Glad to see you with a new pup. -Torn