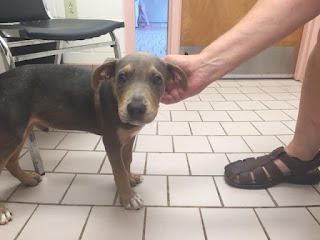 Looking for a new dog is soul-crushing.

On one hand, it's good to be in Northeast Ohio. Shelters from the south use us. They transport their animals up there for adoption due to the high rate of finding them homes.

But it's the non-pitbulls that get selected first...and quickly.

You all saw last week how quickly Gaston went.

The next day we went out to look at Robbie. We were there before the shelter opened and there was a fucking line. People clearly know the game when it comes to adopting - something we are just now learning.

And all shelters are not created equal.

Robbie and Gaston were at - what 710 calls - the concierge facility. They tell you as much as they can about the dog and provide all the things they've done for the doggie. They take in surrendered pets and get displaced dogs from other states - mostly the south. They are very good. It is where we got Sophie....and where my mother surrendered Buddy (who got adopted 4 hours later).

However, the county shelter mostly has strays and knows nothing about the pooch at all. It's questionable they've done much for the dogs save feed and walk them. I get it - it's government and government funded. Still, the place is frightening for some of the more timid dogs. It has to be traumatizing to them.

So, we did go to see Robbie. We were first in line for him. 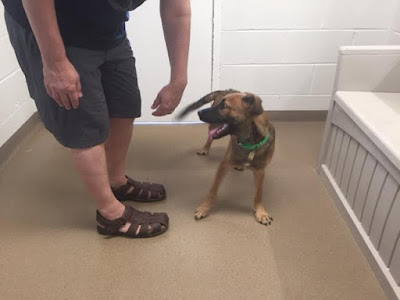 Robbie was all energy. He like gnawing on arms and hands. Cute as the dickens. Hyper Hyper Hyper. Probably more dog than we could handle. Still very much a puppy.

But he was the star that day. Everyone passing the window in our get-to-know-you room saw him...and he them.  We passed on him, but he was adopted before we ever made it home. Good for him.

So it was off to the county shelter...again. 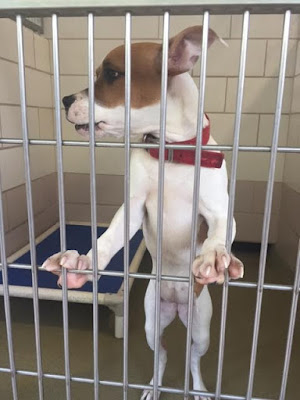 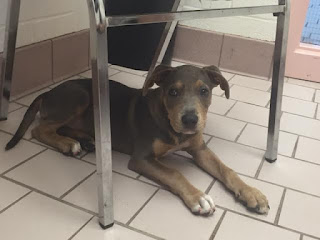 The idea was never for a puppy, yet there he was. Great colouring. Cute as fuck. Docile. All of four months old.

Another couple saw him before we did, and they got their name on the list to adopt first. We got seconds....as it seems many a-time that the people who say they want him don't actually ever show up to claim them. 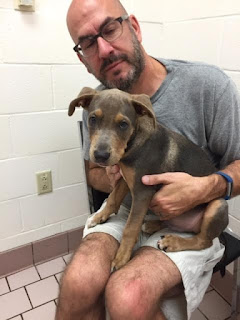 Part doberman for sure. Maybe part hound. He has Petey eyes and nose.

As it turns out we had to wait until yesterday to find out if we would get him. And as it turns out, we did not. The initial couple showed up.

I really don't know how couples who adopt kids do it. This is stressful. It has to be worse on those wanting dogs, because, I mean, dogs are generally more adorable than children.

I suppose like those childless couples, we should start looking at Asians. Shar Pei rescues might be in order.

it is hard and emotionally draining to adopt a human kid - my niece & nephew-in-law went thru hell 2 years ago to adopt their (american) daughter. they are now trying to adopt another (american) kid.

BTDT on adopting furkids at my house. ya wanna take them all home, but can't. keep looking; he's out there somewhere!

Just the choosing would be enough to destroy me. I couldn't live with it on my conscience if I'd passed on a dog or cat which I had the chance to take but decided to try for another, leaving that one waiting there in its cage for someone else to appreciate it. It would haunt me for life! So, it'd have to be either the first one I was offered or get someone else to choose for me. Must be truly horrible to have set ones heart on one particular pet only to discover that it had been whisked away by someone else.
I've no doubt your attitude is the correct one, soundly based on practicalities, but even so it's a position with its deep emotional downside.
I do hope you find your 'little dream' quickly and soon will be showing him or her off to us to coo over. Very good luck to you.

But rest assured there's a dog or a pup out there waiting for you.

Bullfrog is supercute. Looks like it could have been your new great love.
So sorry for you.
We adopted all our cats from a shelter and sometimes it took about 6 month to get one.
Good luck!

I feel for you, so much! I can't go to those places without crying my eyes out. We had to put our fifteen year old Maltese out of his pain two years ago this month. I still feel it. My son and his family surprised us with a two month old Malty mix not twenty-four hours later. Didn't get a chance to grieve properly. At two, Cujo is living up to his name. We adopted a nine year old Bichon poodle mix last year. Until then, we had no idea that Cujo was as dumb as a box of very stupid rocks! Still, one shouldn't compare one's kids :) . I hope you find your ideal furbaby. Add my good luck to the rest.
Deedles

We've had terrible luck with any kind of shelter - seems like all they ever have out here is pitbulls and pit mixes anyway - but great luck with Rescue Societies. Got all four of our cockers from a cocker rescue group, and our most recent kids from a chihuahua rescue and a boxer rescue.

At least you know where you stand with them, and you can learn quite a bit more about the probable behavior of the dog from how they behave in their foster home than you can observing them locked up in a shelter.

hang in there.
I am confident you two will get a dog that seems as if you were waiting for it.

Oh, these cute cute dogs!! I want to walk into a shelter and take them all home. Its wonderful that your area has such a high adoption rate though.