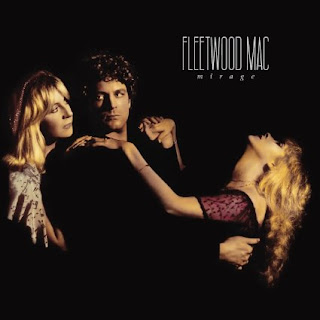 It's been well over a year and a half since I've done a Classic selection. A late night impulsive iTunes purchase brings it all back.

Slowly but surely, Warner Bros. has been remastering any number of releases. In the last few years they've put out several versions (minimum of three re-releases) of Fleetwood Mac's Rumours. Then two of Tusk. And now one for the original 1982 release, Mirage.

All have had varying stages of additional music - be it material that wasn't used, alternate takes, demos and live versions. While I adore Tusk, the 2004 re-release and the 2015 re-re-release had far far far too much of the same 'new' material as each other. With the 2015 version, they just added another disk and jacked up the price by $60 - if you wanted the deluxe expanded edition. And no, that is not an exaggeration.

Mirage, the follow-up to Tusk has the same price points if you want the super-duper deluxe version.

Mirage, at least in the minds of Warner Bros and 4/5 of the band, tried to steer their sound back to more of a pop-rock act than the 'adventurous' Tusk. The reality is, the album has more in common with Tusk than Rumours. Perhaps it's the hybrid with which they could all live.

McVie does not really deviate from what is her norm - and it works for her. I'm not sure Fleetwood Mac has made a better pop song than "Hold Me".  They've had bigger hits than it, but purely as a song, it hits all the marks. "Love in Store" should have been a bigger success than it ended up being. And she has solid outings with "Wish You Were Here" and "Only Over You".

The other big hit on the disk was Nicks' "Gypsy" and it makes four appearances on this collection - the 'early version', which is the album version with the intricate guitar work stripped away, the video version (i.e. longer version) and the live one.

Oddly, if anyone changes things up from her usual Mac contributions, it is Nicks. Her perfectly twangy "That's Alright". With her debut solo disk the year before, she had delved into that genre, but not as well as she does with band.

Of her three songs, "Gypsy" comes in last. "Straight Back" is what you'd describe as a deep cut. The original vinyl version - finally on in CD or .mp3 - finally reappears. It is far superior to the remixed version that was incorporated into the digital versions years ago. It also follows the style of her work on Tusk - a less structured approach, that in the near future of this disk won't always work for her, but it does this time.

Buckingham is the stronger tie to the Tusk style - mostly with "Empire State", "Eyes of the World" and "Can't Go Back" - the latter which I swear is just a song to mock the band and record label. And for all the talk that he is a lover of Brian Wilson, Buckinghan's two other cuts "Oh Diane" and "Book of Love" are pure homages to Phil Everly.

Mirage is a solid disk, if not an overlooked one.

As for the bonus disk - it's what bonus disks usually are - songs that didn't make it for good reason, bad outtakes  and uninspired demos. It's not much different here.

Actually, many of the 'early takes' are just the soon to be finished song without some musical element - be it "Love in Store" and "Gypsy" (missing guitars), "Oh Diane" (missing backing vocals), etc. A less country version of "That's Alright", which isn't nearly as inspired as what made the album.

Earlier I said "Hold Me" was possibly the best pop song Mac has recorded? You'd never know it from the early version. It goes on for two additional minutes, and you really begin to hope it wouldn't. The lyrical arrangement is bad, the versus are different. Whomever's job it was to clean it up and edit it (Buckingham and the co-producers) and earned their fees with this one.

The inclusion of McVie's "Put a Candle in the Window" is clearly a work in progress. Singing nonsense because no lyrics were written is hardly worth $1.29 if you're purchasing it as a separate song. Buckingham's "Blue Monday" shows how much of a blues artist he's not - and it's hard to get any cred of a multi-millionaire groaning about 'Mondays'. And his "Goodbye Angel" was already released in 1992 on another compilation.

Nicks does not fare any better with "If You Were My Love".....the title of which gets repeated 2,600 times for the last two minutes of a song that should have been over two minutes before that.  Her "Smile at You" isn't bad. Her voice is much stronger than when they'd actually rerecord and release a different version 21 years later. There are additional versus that got cut from the latter release, but it is not awful.

John McVie does co-vocal on the Roy Rodger's song, "Cool Water" which was a b-side to "Hold Me". It's well done and unexpected.

I know it was nostalgia that got me to impulsively purchase Mirage. To my credit, I didn't get the super-duper deluxe version. I can't say for everyone it would be worth it. I feel like I got my money's worth just for the original version of "Straight Back".

But for all the money - once again - where the fuck are the album credits and liner notes?
Posted by Blobby at 12:06 AM

Fleetwood Mac
Nostalgia it is for me as well.