Gaston is not ours. Someone else belongs to him.

Doggie adoption is very very stressful for Blobby. The anticipation of meeting a pup you've seen on-line only to have your hopes dashed when someone scoops him up before you even have a chance to meet.

Granted, we 'met' Gaston. He in his cage, me with my fingers through it, even though the sign told me not to.

I called at the opening of the shelter and got the 4-1-1, as Ms Blige would say. Good on a leash. Good with other dogs. No prey drive. Not cat tested.

Two hours later, an hour before we were to each leave work early, Gaston disappeared from the website.

It seems the non-pit bulls (or their mixes) get chosen first. It's a shame, Bamboozler is such a cute / ugly kind of mutt......but he likes to eat chase cats.

I was lamenting all of this with my friends - via email - saying that with all the dogs getting snapped up so quickly, it's apparent that Michael Vick is out of jail.

There was another dog to see though - Robbie. He's a 7 month old Shepard mix. And he's cute. And friendly. And energetic. Allegedly he has a low prey drive too.


But he's 7 months. We got to the shelter an hour before close, but they don't let you do a meet and greet for the last hour. Bother.

So we will go back to meet him today.

However, there was another dude there too - who is not yet on the website and not ready for adoption just yet. Maybe in three weeks. 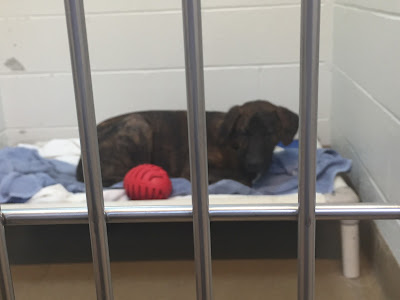 Meet Brewer. It's not a great shot, as he went back to bed. But he's handsome as all get out. Same age as Robbie (and name that will just not do).

Brewer has the itchies. They haven't isolated the problem for this - though they are doing a lot of testing and elimination stuff - including diet.

This could make him hard for adoption, if it is something that will end up being chronic. But 710 and I are used to a special needs dog...at least to a point, so Brewer already has a place in our heart.

We shall see how the visit goes with Robbie today and go from there.

awwwwwww, brewer is a cutie!

Breaks my heart to see the animals in cages. I'd wanna adopt them all.

I can only imagine how stressful it is. Your adrenaline gets pumping and your heart gets set on a dog... that gets adopted before you can get there. But when you find the right one their love is worth all the stress.

LOVED the Pee Wee Herman reference, by the way. ;-)