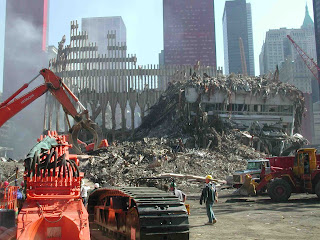 Last year I said this year would be my last 9/11 post.  I still think it will be, but one never knows.

15 years seems to be about right.

Even a year ago, I had in mind the image I would be using for said post. Oh, I didn't have the post thought out - just the picture.

But wouldn't you know, I cannot find it. I am using an image I snagged of the internet. While it is clearer than my own picture, it's not as gritty or conveys the day.

14 years and 49 weeks ago, 710 and I took a planned trip to NYC. It was my nephew's 2nd birthday and I had an interview up in Westchester.

New York City was desolate, well as much as Manhattan could ever be. So much so that you could get any deal on any hotel room - including our $110 per night at the Waldorf-Astoria. It wasn't exactly what you thought it would be, but at least I can say we stayed there.

The plan was never to go down to lower Manhattan. But with trains running very sporadically, and stopping before the station - sometimes for more than a half-hour, because every little thing was suspicious and needed investigation - that we did most everything on foot.

I don't know why we were walking south, but we did....and kept walking. 3.8 miles as it turned out being. I'm sure more, as we went here and then there. No set route. No set destination.

Then we were at West Broadway - looking downtown. But somewhere there, police barricades appeared and going south - from that area - was no longer an option. But you could see things. Far away remnants.

We headed east, then south until we got down to Fulton. From a cross-street level it was hard to miss, by sight and smell.

Well, except for one asswipe.  He walks in front of a large group just standing there watching the burning remains, and goes, "THAT is still burning?" and then continued to walk on to wherever he was headed.

I shook my head. It was hard not to watch the news back then. Anyone who remotely watched tv knew it was still burning.

We stayed for a short while and headed back north. We wanted to go further south, but the barriers were too many and it wasn't really worth the effort.

As odd as it sounds, I was glad to see it live and not just a shot on a television screen.

15 years later and it is hard not to remember most everything about that day. And since I'll never forget - until dementia - I see no reason to recreate the experience here anymore. I have learned to avoid all the tv specials on this time of year. They offer almost nothing new. I did my deep dive with things in print or on tv.

I think I'm officially done needed to see those every again.

Song by: Fleetwood Mac
Posted by Blobby at 12:11 AM

Email ThisBlogThis!Share to TwitterShare to FacebookShare to Pinterest
Labels: 9/11

We used to live about 3 miles from the Pentagon, and I zig-zagged through driveways and parking lots to get around barricaded roads in order to get close enough to pick up my relatives who walked across the bridge out of the city. I'll never forget that day either, although in some ways I wish I could.