Don't Think Twice, It's All Right 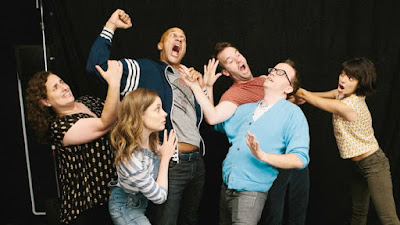 Another movie viewing is in the books:  Don't Think Twice.

I'd like to say it was at the top of our list, but it wasn't.  I didn't know much about it other than the movie dealt with improv and was produced by Ira Glass from This American Life.

As 710 so aptly pointed out, I could never do improv. I don't follow at least two of their top three rules: "say yes" and "don't think twice".

I overthink most things and say "no" quite often.

Don't Think Twice is funny but not funny. Centering on an improv troupe, one person gets brought up to the big leagues and it fractures the nature of everyone's being. The overly tight group all react differently - yet the same - as the movie progresses. As you might expect, it shows the slight underbelly of comedy with the players ambitions, or lack of, egos, hurt feelings and camaraderie. Being business of  being funny isn't always laughs. But I suppose Tom Hanks and Sally Field taught us that two decades ago.

There are humorous moments for sure, but the awkwardness is more real and palpable.  And it was hard to argue with the line: "your 20s are all about hope, and then your 30s is all about how dumb it was to hope".   True that.  Assuming 'hope' = 'drunk'.  No?  Just me?

I knew most of the cast - if not by name, then by sight. Each one does a nice job and each has their strong moments, but I think the stand out is Gillian Jacobs (from Community and who had a recurring role on Girls). There is a scene near the end of the movie that is so nuanced and subtle, but it just struck a chord.

I'd say that Don't Think Twice is a good movie, but not an easy one. The theater was packed, but there weren't many LOLs.....though there were not supposed to be. I just don't think a lot of people knew that going in.

We saw Florence Foster Jenkins yesterday and caught the preview for this one; it sparked my interest.