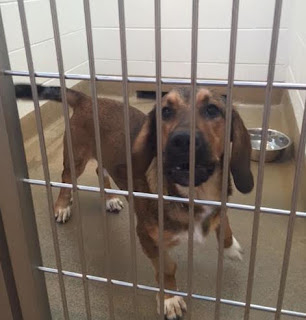 The search has begun.

Yesterday, 710 and I went to three different animal shelters. We saw dozens of dogs. By the end of the day, I was emotionally drained.

It seems that amount of love Blobby has for doggies and the amount of doggies there are waiting for homes spreads fairly thin after hours and hours.

It is do difficult for me to see the homeless pooches. I have to feel they are so stressed by their environment and some of the more boisterous dogs don't help the scared ones in the slightest.

But on the other hand - while there are some full shelters, I am amazed at how many of the dogs find homes. This week alone, 710 and I have been independently looking online. And then if you look a few hours later, the dog in question is gone.

We ran into this nice couple who were doing a great thing and taking home two boxers who they didn't want separated....so they didn't!

There are sooooo many pit bulls in these places. They are cute, or can be. And I know they can be loving. But some do have high prey drives, and I can't have that. Sophie and all. They do get a bad rap, but I don't want the neighbors to be avoiding us either. I don't think it's the breed for us.

The names and backgrounds they give them just make me wince....or laugh. Some are surrendered animals. Some are strays, so they don't have their name. 710 made me laugh when he asked if we should adopt "Ava Gabor".  I wouldn't change or even shorten the name.  "Dinner time, Ava Gabor!".

There were two we both liked.....neither yet up for adoption, as they are 'under evaluation'.

Gaston here.....is a beagle mix. We are partial to beagles. But he was soooooo attentive, so loving, so fucking cute. He was like an animated Petey.....without the white tipped tail. And the tail was much longer than a standard beagle.

I'll see if I can't get more information on him today. There was nothing posted on how old he was or anything else.

Of course, these are just the shelters. There are a lot of foster and rescue places too.

To be honest, I was a big dejected when we got home late yesterday afternoon. I can't adopt every dog, but I guess I'd like to.

I suspect we will have a new family member sooner than later. Time will tell.

blobby DOES love his doggies; you will find one that begs you to love him/her!

Nice, that you and 710 are ready and looking, and nice that people are going for these rescues so much.

My two cents' worth: go to the Humane Society of Greater Akron (not sure how far you are from there)...wonderful dogs. We have plenty of pitbull/mixes but many others (sadly). And yes, the names are dreadful. I have no idea how they choose them (I volunteer to walk dogs only; no one asks my input on names), but some are cringeworthy. The saddest by far, though, are the old dogs whose owner has passed on, and no one can/offers to take the poor pet. Makes me cry every time. Good luck with your search!

Gaston, all he needs is you.

Yes, just do what Fearsome said!

I could not do it; I would have to take one of them home.

We've had to change the names of most of our shelter dogs. Something close enough that they won't get confused yet sometimes not much better - but at least a name you wouldn't be ashamed to shout out in a public dog park.

Last year when we invited friends to our Christmas tree trimming party we encouraged them to bring items and cash to donate to the local shelter. When I took the haul to the shelter I allowed myself to look at the dogs and cats awaiting new homes and wanted to bring nearly ALL OF THEM home with me! I can certainly see how emotionally draining it must be to look for a new family member and just pick one. I'm sure you'll make the right decision.