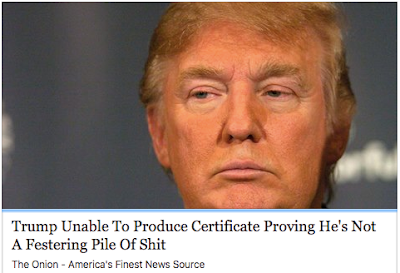 I honestly don't get it.

I don't get a lot of things actually, but let's stick with (t)Rump and this birther / non-birther crap.

I get he might believe the shit about Obama not being born in Hawai'i. I get that he's spent the last five years touting this.

I truly believe that he didn't believe any of what he was saying - but that he's just a racist, scum prick and he liked the attention of relaying such things, even  - or only - if for just grandstanding reasons.

And it's a story he's gone on and on about for half a decade.

Now the tune has been changed.  Or has it?

No, Il Douche gets a 30 minute press event for his hotel (which you should really read the Washington Post review), after which he hastily mentioned the 180.  No apology of course, but I laugh that the press - or anyone - thinks that he was going to give one.

My confusion isn't with the original story itself - it's with the, why bother changing it now? Is there a rationale that if he didn't he'd lose some kind of votes?

It's all well and good he said it, I suppose. The people who believed that story / lie aren't going to suddenly go "oh, well if Donald believes that Obama is an American, than it must be true".  And even if they did - so fucking what?

For all of Donald's politicking, you'd think he was running against Obama, not Clinton.

Il Douche doesn't really bow to public pressure, and another thing I can't figure out is: why in the last two weeks, of all the stories / fibs / outright lies he's told, is this one raising its ugly head again? Who is even bringing this up as an issue let alone a current one.

The things the media focuses on is baffling to me. When his campaign manager asked a CNN anchor, "are you calling him a liar?" I would have paid a kerjillion dollars for her to say, "Yes. Yes, I am".

So, for something so incredibly stupid, (t)Rump gets to control the news cycle for a good 3-4 days.

Song by: Soundgarden
Posted by Blobby at 12:06 AM

and as my spouse said last evening, 50 more days of this shit from the cheeto?

If only pants really did catch on fire!

Yes it is insanity. It is very depressing