I don't even think I'm going out on a limb when I say that no NRA member or 2nd Amendment stalwart would be able to see the irony or the disparity (or possibly the lack of it) with these two news items, when it comes to "government overreach". 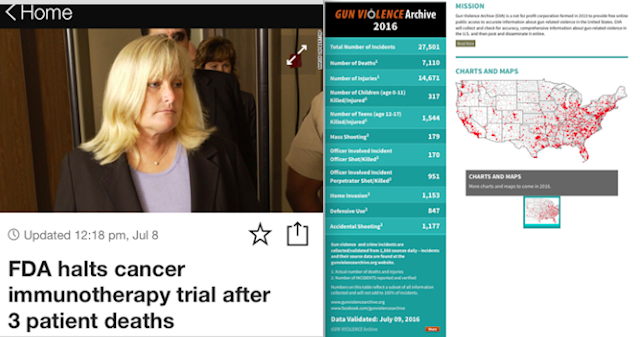 Seven months ago I wrote about the reaction to Ebola versus gun deaths.

In the same vein, I kind of laughed when looking at CNN on-line.  But only kind of.

I have yet to hear anyone lamenting that the federal government is attempting to take away their cancer treatment. To be fair, the U.S. Constitution does not have vague, horribly outdated text regarding medical treatment.

I wonder how many gun nuts enthusiasts with a family member who are ill would be willing to play Russian Roulette with those lives - and tell the FDA they can pry their chemo out from of their cold dead hands. Very few.

But how many of the same group would sue the FDA regarding a chemo trial that killed one of their loved-ones?  Every. Single. One.

Yet, here we are again, doing next to nothing.

I will be honest. I have seen the headlines and the screen caps of the video of the police gun pointing into the car window. I get there was a video on the death. I did not read a word.

I saw there was a killing in Baton Rouge. I did not read a word.

Of course, I saw the above the fold stuff on Dallas, but I did not read the article.

Did Not equals Could Not.

I'm not burying my head in the sand exactly. I might  - might  - delve in to any of those stories had there been anything new with any of the stories.

I'm not even getting into gun control per se here today. Like the news, there is nothing new under the sun with that one here at this blog. You know my stand. I think.

I just get confused by the lack of anybody pointing out the absurdities of comparative stories like the CDC, FDA and NRA.

I've said it before and I'll say it again:  if it were a disease with this many deaths, people would move heaven and earth to cure it. Maybe we should say 'getting shot to death' is a disease. Then maybe someone would be all over 'curing' it.

yep. the NRA has more power than we the people.

That last paragraph says it all.
We fight cancer, we fight AIDS, but we let guns, and anger and hate and racism run rampant.