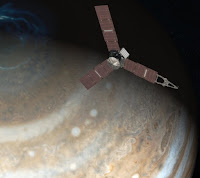 By the time this gets posted, Juno, a solar powered spacecraft will have entered Jupiter's orbit.

Taking a five year journey - which really doesn't seem that long for that far - Juno should be in place shortly before midnight.

While there is no way Jupiter can support life, as it has massive gravity and you know, lots of nitrogen and carbon, but no oxygen, for some reason one of Juno's functions is to search for water.

I shouldn't say there is no oxygen, but if it exists, it is scarce.

If the spacecraft finds water it is possible that it's current orbit wasn't original and that the planet formed farther from the sun than where it now resides.

The planet's density and gravity will be measured and can potentially tell if the core is rocky or formed from a collapsed gas cloud.

As with any approach to a planet this whole thing can be for naught:  solar panels might not open, or turn towards the sun to be recharged, it flies to close to the planet and implode (the probe, not the planet), and there is debris (hey, we all saw Gravity) and of course, there is rocket fuel on board, so, you know.....kalboooie.

I'm just intrigued by space travel - as I've said before. I will have to be in bed since it's a work day tomorrow, so I won't be awake for the live NASA feed.

I mean, I'm sure I'll be awake.  People are setting off M80s for days, disturbing poor Sophie....and keeping me from getting a good nights sleep.

Thank heave at 22:00, it's pouring rain.  Maybe it will continue and keep that BOOMs down to minimum.

On this morning's news it's looking good for successful orbit, Blobby.
Having been dead keen on Astronomy since I was little more than a nipper, it still always takes my breath away that when considering the mighty number of calculating factors involved and the immense capacity for one tiny error which could fail the entire mission, they yet manage to achieve accuracy in getting to work as hoped. Hats off and a huge round of applause for all those involved. I'm now excited as anything for finding out what discoveries about this gas super-giant are to be revealed.

amazing that it took 5 years to get there.

"this gas super-giant" - raybeard COULD be talking about donald the rump here! ;-b

I cannot wait to see the pictures!

No, A.M. That can't be right. Jupiter may yet prove to be entirely made of gas, albeit solidified at its core. Oh, but hang on - maybe on second thoughts......

This is most exciting.