Looking For It (Finding Heaven) 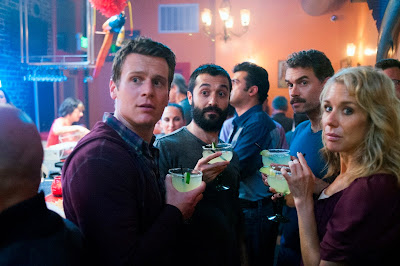 So HBO got to wrap up the cancelled-a-year-ago show, Looking.

I liked the series, and was kind of thankful that HBO allowed a cancelled series to have a completion after the fact.

The 'movie' was ok. Nothing outstanding on most levels. The problem with these finales is that they try to wrap things up - and it is usually too quickly or too neatly.

Some of the conclusions are wrapped up - kind of with a bow - and some of them are not, but you see the potential path.

All the storylines seems to be expedited for the sake of the two hour block of time HBO allotted.

So much gets done in a weekend. Nine months away from San Francisco and Patrick - arguably the nucleus of the show - has it figured out (kind of). Two hours after breaking up, a new couple has formed and started road-mapping their life.

I don't care how much you might love someone - planning your life around someone who is newly single for 120 minutes, seems ludicrous.  I mean, they're not lesbians. They're gay men.

The performances were solid, but it was all satisfying - like a eating a PBJ when you're hungry because you can't be bothered to make anything more substantial or invest more time.

It seems that for gay men - you either loved Looking, or you hated it. I might be an exception, I liked it. It's hard for me to love.

The gays who weren't fond of the show,criticized it. Apparently, that's are cardio. Gays want unity and to be accepted, yet we turn on each other faster than any straight person would. And usually the claws come out.

So many gay males just ripped the show to shreds for any number of reasons. My lord - it's just tv (well, no....it's HBO) and if anyone can think one show can represent any and all of us, then they are the ones who have the issue. Maybe the gay (non-professional) critics saw the mirror being held too closely to them and didn't like what they saw, I don't know.

It's no coincidence that Doris chimes in: “I love it when gays fight with other gays about being gays.”

And it's no coincidence when Patrick sarcastically yells at someone who clearly doesn't like him. The show creators certainly got to take a jab at those taking jabs : "I’m everything that’s wrong with the gay community. … I promise to read more of your articles and hope that one day I can finally learn how to be gay and be as perfectly adjusted as you!

There were real-ish moments with the 'movie'. I sort of like Patrick and Kevin's coffee shoppe encounter. Though if someone yelled at me like Kevin did - I'd have walked out, either angry at them or embarrassed of what he was {probably} rightfully being accused of.

And like the original series, I probably still like Ritchie the best, though most of his dialogue here is advice-speak. As Derek Zoolander might say, "oh, so now he's a philosophizer".  And Agustin is still the cute one.

It's probably no surprise that my faves are the two actual straight men in the cast.

So - it's over.  The series didn't end at a great point in time. The movie doesn't either - - it's just neater.

Much like you, I "liked" the series and "liked" the movie. Spouse didn't like either. He complained that they were too old to be acting so immaturely.

In my opinion the best actor is Richie. I have to remind myself that he's playing a character. And I liked how Eddie was the stereotype buster, big and bear-ish looking, but nelly acting. He was probably my 2nd favorite character after Richie.