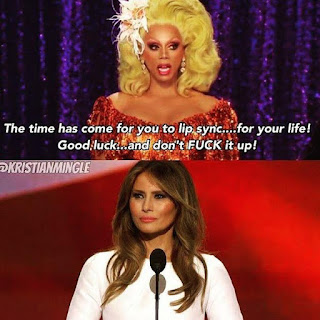 "They" say 'imitation is the sincerest form of flattery'.

FLOTUS must be flattered to death!

The problem with refusing to watch any of the RNC convention is that well, you miss out on 'breaking news'.

I was already at work before I heard about 'the speech'. Singular speech. Used multiple times.

I'm sure you're already aware.

This is what I get for not blogging about almost real-time political events. Now this post seems like, "yeah dude......we've heard it all before".

Poor Melanoma (t)Rump. Left was left hung out to dry on her own, when you know some lackey (read: former adviser) "wrote" the speech for her. I mean, Lisa Douglass had a better grasp on the English language and could converse better than this woman - so you don't actually think she had anything to do with "writing" this speech do you?  I'm not sure she's even smart enough to plagiarize.

Of course she's not smart enough - look at her life choices.

But you gotta figure - she. is. PISSED.

Now, being all conspiracy theorist about, well, everything, how is it that everyone knew about the similarities immediately. I mean, I love Michelle Obama and all, but I'd never remember a speech she gave.  Ever.

Allegedly, some laid-off gay journalist has a better memory than Blobby - and tweeted the he noticed they were close to the same.

But what people aren't saying is that Melanoma isn't the only plagiarist in the family. 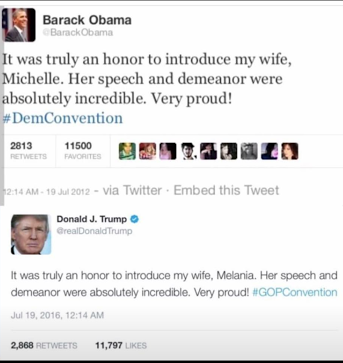 I had to look up the Tweet to see if it was real, but yes, Donny (or whomever writes Donny's tweets) wrote word for word (save the name of the wife), right down to the exclamation point.

In a way, I'd love to know the campaign spins all of this, but then I'd have to listen to them. So, the risk-benefit analysis I did in my head doesn't pay off. I won't be listening or reading anything they have to say.

Including last night's stuff.  I'll just be late with the news in tomorrow's post.

I love that neither Michelle or Hillary have to do a fucking thing with this either. Social media has taken over - humiliating Donald and Melanoma over and over and over again.

And I would pay three kerjillion dollars to have Bill Clinton come out at the DNC convention and just do one of (t)Rump's speeches. Word for word.

It would get huge laughs and mock the republican candidate with no mercy whatsoever.

Bill would have the integrity to start off with, now in the words of the DONALD,

The Rumpers are saying no one will be fired for StealingSpeechGate because, now they say, it was a family friend who helped Melania steal, er, write her speech.
Except when Melania said she wrote it herself.
And except when the campaign said her "team" of writers helped her.
And except when a Rump spokestool said Melania shouldn't be blamed because English is her second language.

Sidenote: the news that the RNC website calls Melania a college graduate ... except she dropped out to pose nude on fur.

All I can say from the few clips I've managed to watch before cringing to the point my fingers hit the channel change button, your town sure is white....right now. Really white, scarily white....lily as an adjective comes to mind.

Trump reminds me of a huge chocolate covered marshmellow. Just looking at it is impressive and your mouth begins to water. But once you bite into it you realize there's no substance and you feel utterly unsatisfied.

The speech plagiarisms are just inexcusable and ALMOST lead one to believe there's a mole whose job is to sabotage the campaign.