It's All Over but the Crying 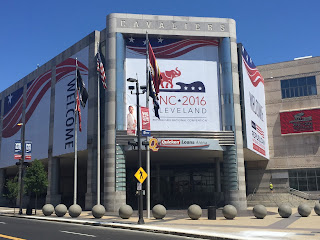 By the time you read this the GOP convention will be over and "these people" will be packing up and leaving town.

I am sure I'm missing stuff {again} by not watching a second of this thing. I just can't even.

More power to you people who can even watch for part of the night. I don't have that kind of strength.

Granted, I missed Michelle's Melanoma's speech. I missed Satan Cruz revoke (t)Rump. And like Kasich before him, I'm feeling dirty that I have a smidge of respect for Old Ted. But just a little. Minuscule in fact. Electron microscopes couldn't even pick up on it. But I know it's there.  Drats.

There is no fucking way I'm watching Trump's speech. I'm hoping he'll implode, but I'm not wagering any cash. I'll get the highlights later this morning with screen caps with witty sayings on them via Facebook.

The head of Log Cabin says that Donald (t)Rump is their friend.

I know that throughout history, mostly in the way way past, that the homos have limited choices in friends. But is this what it has come to?

Again, this is my lack of understanding.

With such blindness - not even blind faith - people are dropping to their knees for this man. A man who cannot prove he can do a thing - or answer a question directly - he can treat you like shit, and then all is forgiven.

I mean, unless your Ted Cruz.

Cleveburgh has made it through. No riots. No looting. No shootings. At least as of 22:02. After that - who knows?

I'm sure I'll read about it.

I hope my city can say the same this time next week.

the rump and his entire family and all the rumplodites can go fuck themselves!

I've just watched him on our news. He shouted a lot.
JP

Like you I just couldn't stomach watching it on TV. Its bad enough that I couldn't enjoy my facebook feed with all the articles, memes, videos and such. Its just so scary that there are that many people who might vote for this man who pathelogically lies and has absolutely no REAL plan to improve things.

I barely watched any of the RNC either. This makes it the first RNC in memory I've not seen. I also successfully avoided most of the media coverage by only watching PBS News Hour and forsaking the 24-hour cable news networks.