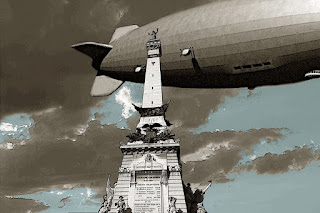 You get a two-fer today.

As you can see from the title image, the RNC has come to town.

I fear you might be getting a daily GOP post this week. Hopefully with some amusement here and there.

Perhaps that day is not today.

Trying to get from our place to the movie theater on Saturday, traffic detours became troublesome. At that time, everything scheduled to be shut down had yet to be enacted. Today it is all in place. Troublesome is not compacted into improbable.

Where the protesters, the shootings both by and of the police were enough to put everything on high alert this week, the events in Nice certainly kicked it up the paranoia a bit.

The barricades were expected. Double fenced barricades, maybe not as much......

....and this wasn't even that near the convention site, but there are miles and miles of fencing. Well, it's near the convention center, but not near the Q, which is the arena, where the main stuff will happen. Still, it's in the "perimeter" just not the more compact 'security zone'.

Yes, fences, xray scanners, mirrors for under the cars and barricades were all expected.

The large-ass vehicles - county, city and state - placed at strategic areas of town and manned 24/7 so they could be moved into place blocking access in or out of town. These are the highways. Some of the other public areas, those mobile barricades were put into place right after Nice.

That part was a little sobering. As 710 mentioned, it's like every apocalyptic movie he has watched, trying to keep people - and usually a deadly virus - contained. Of course, that never works. But now it's not on the big screen, just right in front of us.


Mind you - open-carry laws are still ok, except in the security zone. But do NOT even think about bring a water pistol or super soaker. Those, are banned.

I shit you not.

I'm sure Ann Coulter would melt if someone doused "her" with water, but really?  Ok. I get that those can be filled with bleach or acid. So what?  A gun with bullets or hydrochloric acid both still maim or kill. And did the framers of the 2nd Amendment say what had to be loaded in the guns?

They did not!  Where's the ACLU on this one?

Oh - you also can't bring locks, chains, rope or tape. I suppose it's a good thing there isn't a bondage convention already booked in town, cause they'd be outta luck.

You can't bring canned goods in either. Spam I get. But sometimes tuna is good.

The real crazy starts today. (t)Rump will no doubt be staying less than a mile from our house. It's the only hotel in town with a penthouse that has bulletproof glass.

It's unclear whether a shoulder mounted missile can penetrate that hotel.

Resurfacing from the bed of shoulder surgery recovery into this parallel universe of a bad 1980s Donald (t)Rump nightmare convention has me bewildered. So what you are saying is my H2O AK-47 isn't covered under the open carry laws? I wonder how that would hold up in court?