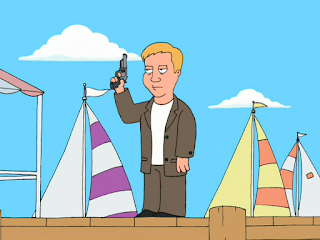 So John Hinkley is getting out.

It only took 35 years. So the system works.

I suppose even Jodi Foster needn't care - since he turned her queer, though to hear it, Patti Davis is pisssssssed.

“If John Hinckley is haunted by anything, I think it’s that he didn’t succeed in his mission to assassinate the president.” ....said the woman, who I'll be dollars to doughnuts has never even met the man, let alone talked to him.

Perhaps it's those voices in Patti's head telling her to say those things. Maybe someone should lock her up for three decades.

Hinkely wasn't locked up for his crime per se. He was there for mental health reasons. The same mental health issues that allow others to shoot up cafeterias, movie theaters, children's schools. Yet they get no psychiatric care.

Mind you - the prison system is unfair too. Squeaky Fromme and Sara Jane Moore did their time and both released, spending less time than Hinkley - and Fromme had added time due to a prison escape.

And speaking of Manson folks, Leslie Van Houten was granted parole by the board, but Jerry Brown quashed it.

By all standards, she is the model prisoner - including earning multiple degrees while incarcerated. And it's been 47 years in prison. The woman is almost 70 - I'm skeptical she's a threat to anyone other than Medicare.

That is fine. But stop trying to pass off prison as anything more than caging people. You're not looking to reform anyone. But out of sight is not out of mind - nor does prison seem to be a deterrent for well.......any crime. Ever.

If it were, the system would not be overflowing.

On the upside - Hinkley has doctor's visits in DC, for which he is allowed to drive himself. Maybe t(Rump will be there and John will have a relapse.    .....but this time he's doing it for Ellen Page.