Born to be Alive 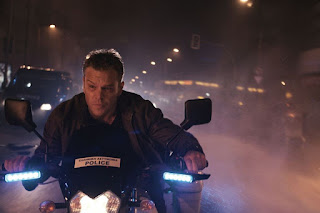 We made our movie goal - and in record time I might add. Not only that, I had upped the goal 33% from last year.

Under promise; over deliver.  That's what I say.

Our friend, James, loves the popcorn movies. Usually, I can take or leave them, but while we saw our last movie with James' husband, this was double-date night.

When David suggested it, I internally cringed a little. Luckily it was via an email and he couldn't see my reaction.

I've seen the Bourne movies.....or movie....as there doesn't seem to be a huge difference between (m)any of them. But I've always seen them on television - and not even the premium stations - just channels with commercial breaks.

However, anytime one is on, 710 watches. It turns out, James does too. So David and I went for them. We are givers!

Before we get into my review - I'll give you the opening of A.O. Scott's:


Jason Bourne, taciturn and carb-free, hurries through various European capitals with the grim determination of a tourist who desperately needs a men’s room but is too proud to ask for directions.

That's close to summing it all up.

Of course there is running - just not as much as when Damon was 30. But there is a lot - and I do mean a LOT - of jerking camera action. On purpose, one assumes. Or every single crew member has advanced Parkinson's.

Bourne is two hours long, but moves quickly. There isn't much of a story there - not one that hasn't been carried over now for four films. It is mostly all chase. I mostly always is. And I think that's what the audience (read: guys) goes for.

If there is any underlying story, it would be one of privacy in the age of internet and how Google Gryzzl (or Deep Dream here) spies on everyone every moment of every day.

I'd need an abacus to keep the body count toll. Sure there are like 20 obvious kills and then the dozens that had to have occurred in some of the chase scenes - one of which had both David and 710 laughing out loud. Of course those 20 are just the bodies you see. One of the chase scenes had to leave several dozen dead - and yet, not one blood curdling scream.

I kid you not about the jerky camera scenes. It's constant. Probably not the best movie if your are epileptic.

Afterwards, we like to talk about the movie over dinner. We discussed the filmmaking itself, but some holes in the story, the characters themselves and then my inability to suspend disbelief. Like....

-- The CIA is so inept, they cannot find Bourne who is living off the grid. Yet a woman in Iceland who he hasn't seen for years, knows that he happens to be at the Albania / Greece border and finds him in like a day?

-- In a car chase scene....on Las Vegas Blvd.....seemingly going 80mph - why does it take 4 minutes to get from Planet Hollywood to Paris, when they are right next door to each other?

Have you ever been on that strip? If you went 5 miles per hour, it would be like breaking the speed of light. If Tupac's driver could have moved half as quickly on that road, he wouldn't just be a hologram.

-- Am I the only one to notice Matt Damon and Julie Stiles running past the same kiosk in Greece at least three times?  I get it's expensive to move the crew and shoot new locations, but c'mon.....this is big budget.

-- For the love of g-d, when you knowingly meet with a "former" member of the CIA who now runs his own security firm, how do you not first check to see if he's wired for sound?

-- It is also my assumption that every car that anyone drives in these movies has a Takata airbag. The failure rate is 100%.  I take it back - the VW bag went off, but the company is really just hoping to deflect your attention that the MPGs don't match what they claim.

Damon is fine. There is zero surprising in his performance. Stiles....well.....had she skipped college and put those funds into acting lessons, maybe she'd get more roles than one every 5 years....as the same character.

Alicia Vikander? I'm realizing she may no longer be acting - and that this is just the person she is.

Tommy Lee Jones on the other hand.........well, yes, he's pretty much been the same character since the Fugitive and whatever he did w Ashley Judd.

I didn't know Bourne was a horror flick. There area few shots of Jones that are absolutely frightening. Let's just say - lighting may not be his friend. He scared the BeJebus out of me.

For all the running, chasing, driving, shooting, I can honestly say my resting heart rate never increased.  I guess that should say something.

If you go in with the expectation of a Bourne movie, you won't really be disappointed. If you're looking for anything more, you might be outta luck.

Song by: Patrick Hernandez
Posted by Blobby at 12:05 AM

Might be breaking my film-fast with this one in a few days. Sounds okay (reviews here are generally positive) but I'll be thankful for a coupla hours distraction from present problems in any case. I only hope that Ms Vikander opens her mouth enough this time to give us an inkling of what she's on about, though from what I read it'll hardly matter in a film like this.