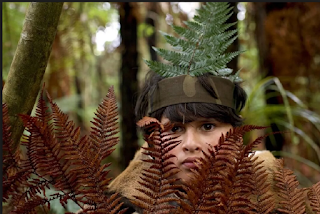 On a 90+ degree Sunday afternoon, we were looking for a way to beat the heat, as we have no air conditioning, and we'd already killed time at Costco, so we decided to head to the movies.

AbFab was the movie in mind....until a friend of ours pulled into the parking space right next to us. He was on his way to see Hunt for the Wilderpeople, and did we want to join.

We had seen the previews a few weeks ago, and we were somewhat interested. We very temporarily weighed which of the two movies would be around for another week.

As much as I like Eddie and Patsy, I'm still skeptical that there is an audience for a that movie on the big screen - let alone for any amount of time. But the person we were with used to head the Cleveland International Film Festival and he was trying to get in Wilderpeople before he thought it would go away - even though it just opened this weekend too.

So into the Wilderpeople we went. (I did peak into the AbFab audience as it assembled - about half were middle aged gay men.....as you might expect).

Let's start out that I thoroughly enjoyed 90% of the movie. There were two parts at which I had to turn away, but I won't delve into those details lest you go see the movie.

I'll stay away from spoilers too.

The basic premise is: two societal outcasts - one young, one old - are thrown together when circumstances demand.

While Sam Neill isn't as old as Ed Asner's character in Pixar's Up, the kid is a little portly, like the kid in Up. And instead of having adventures on top of some cliff, they are in the New Zealand bush. Though like Up, the two characters in Wilderpeople do spot an extinct bird. And like Up - the two are chased....hence the 'hunt' part of the title.

That's about all I'm truly going to give you.

I know we are just halfway through with 2016 - but I can easily see Hunt of the Wilderpeople in my top 5 movies of the year.


Song by: Laurie Anderson
Posted by Blobby at 12:08 AM

I'd not heard of this but it sounds intriguing.

Spouse & I want to see AbFab despite our own trepidations or what ANYONE says about it. ;-)