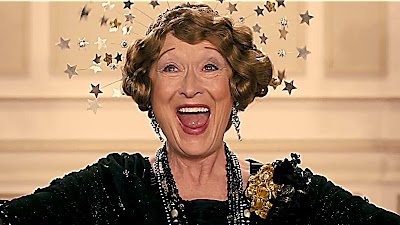 So, I mentioned we (read: 710) got two free tickets to a movie screening.

Date night in the middle of the week? I'm barely home before 21:00 and 710 is usually an hour behind me. Still we made it work.

It was on my list anyways, since seeing a clip from the beginning of this calendar year. It's slated to come out in the states - or at least Cleveland - next month, but we got in a month early.

Oddly enough, they used one of the smallest theaters to screen it. And it was packed. And we got there over a half hour early. And, honest to g-d, I think we were the youngest people there. How is this even possible? The really weird thing was that there were two security guards. Odd.

Anyways - Meryl Fucking Streep (say it like Billy Eichner) has the title role. The director, Steven Frears did the excellent the Queen and the very good Philomena. The story line is about a wealthy patron of the arts who wants to sing, and can't.....except that nobody bothered tell her.

Good trailer.  How will this movie not be great?

The acting Streep is good. Nuanced where she should, over the top when it's needed. The "singing" Streep is amazing.

Amazingly bad, that is.

As it turns out FloFo (as I'm calling her), is one of the worst vocalists to come along in history, that is, until being dethroned by Paula Abdul.

I won't say in real life Streep is a bad singer - though she isn't winning any awards for Mama Mia. (though she is sooooo much better than Pierce Brosnan - but who isn't?  I mean, even Paula Abdul is better than that!) But I liked her singing in Postcards from the Edge. I didn't see Riki and the Flash, but apparently nobody did.

But it takes true talent to sing this badly.....and on purpose.

I am stepping back on the why I know it wasn't great. While Streep is technically great, the director doesn't give her much heart in the part. There are moments for sure, and more of those would have been welcome. Needed, even.

Surprisingly, Hugh Grant gives a much stronger performance. Well - let's dial that back a little too - maybe not quite stronger than Streep, but a lot stronger than most of the stuff he produces. Who knew?

I suppose that I expected more from the combination of Streep and Frears. Florence Foster Jenkins isn't bad by any means, but it's not as emotional or have a depth that Frears' last few flicks have gone.

If you go - go for the musical performances.


Oh - on the way out, I axed one of the security guards, why the need for such an audience. They said they have them for all sneak previews, because people try to sneak in. Really?

And two women were writing down people's reaction (?) as we walked out of the theater. Not asking any questions, just if people were smiling or talking of the movie.

For the record: we were chatting about what to do for dinner.

Song by: the Michael Stanley Band
Posted by Blobby at 12:07 AM

I'm pretty much with you on several fronts:-
F.F.J. - a good film but failing to pack the punch that one felt it ought to have had. Still worth seeing, though, if only for Hugh G.'s performance - as good, or better than, anything he's so far done.
If Meryl gives it her all, which she can always be relied on doing,in this film the 'all' that she's allowed to give comes over as a little bit short of her 'letting rip', and left me feeling something yet wanting. (I do wish I could let go of my regret that she wasn't chosen to play the film 'Evita'. Although Madge was in no way actually 'bad' - though you may think that she was - La Streep could really have made a meal of the role, singing et al.)

Btw: I was one of the lucky ones who did see 'Riki & F' and, despite not expecting to have much sympathetic correspondence with story, setting and the music, I was agreeably surprised by my liking for it. Pity you missed it, at least on the big screen.

As a lifelong member of Team Meryl, I cannot wait to see this, though what you said about the film is also what I've been hearing.

I also saw Riki and liked it though ti was kinda TV movie formulaic. But still Streep AND Audra McDonald!?!