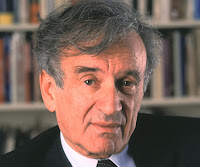 In a year that has been full of losses, it's hard to minimize the death of Elie Wiesel.

No doubt the Bowies and Princes of the world will get more ink, but Wiesel had way more impact on people - myself included.

If you have a chance to read Night, his account of being an Auschwitz prisoner, and then at Buchenwald when he was a teenager, you should. It is quite gripping and horrifying. He watched his siblings and mother be killed in the gas chamber and his father starve to death.

Wiesel certainly used that experience to help educate the word so something so heinous would never happen again - and was instrumental in helping establish the National Holocaust Museum in Washington DC. That place is emotionally draining, but incredibly important.

Clearly the man was well regarded in subject matter of genocide. He brought more than a human element to it, as he survived and saw horrific things. But he used that to bring attention to other areas of the world where things like that still happened - Darfur and Armenia.

Wiesel thought that as painful as it was to continue to bring up his experiences, he felt that forgetting would make him - and other survivors - guilty.

And it is true that those who forget history are bound to repeat it. We are living that right now. I know people make Hitler / t(R)ump references and some of them are tongue in cheek, but they really aren't that far off the mark. And maybe it's not quite him, but it is quite his followers. The hate and bigotry are so real, it is frightening to me. I do love how people think a Clinton win will solve the treachery of a Donald presidency, but honestly, if he loses (and I think he will), do any of you think that his supporters are going to stand for that?

It is going to get so much worse before it gets better.

It's a shame Wiesel won't be around for this upcoming U.S. election. Historians won't be able to tell the same story. They can tell facts, but not emotion.

Song by: Bruce Springsteen
Posted by Blobby at 12:10 AM

"...the National Holocaust Museum in Washington DC. That place is emotionally draining, but incredibly important." - yes, yes it is. the shoes and pictures got to me.

We need to remember what happened, and speak of it, unless we want it tio happen again.

I haven't read the book, but now it's on my list.

Beautiful tribute post Blobby. I was lucky enough to hear him speak in person. He was a professor at Boston University and gave talks once a year that were free and open to the public here. He was an amazing man.