I am at a loss this 4th. This Independence Day.

Is there any independence these days?  Quite the opposite actually, with the potential to be even less so.

Please, won't someone tell me what that means.

When exactly was this mythical time?

Was that when "we" were fire hosing or lynching people of colour? Was that when "we" passed along venereal diseases to the natives of this country - before we slaughtered them and stole the land? Perhaps it was that one time since 1775 when we haven't been at war?  Or that time we were oppressing the Jews? Blacks? Irish? Women? Gays?

Maybe that 'great' time was when men wore suits, had 2.3 kids a job and they weren't fat fucking retards with their guns, 4x4s and GEDs.

Of course, what they really mean is that great = white. 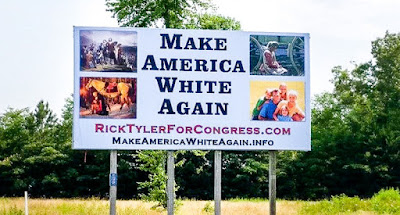 And at least Rick Tyler is saying what (t)Rump won't actually come out and say -though he clearly means it. Donny doesn't want to offend his "African-American over there".  As much as I'd loathe a man like Tyler, I'll give it up for him being honest.

And besides the white aspect, let's be clear, they mean .....christian....and straight....and male. Because that is what 'they' really mean by 'great'.

Still - this is what America has become: the dumbing down of......well.....everything.

I am, and never was, the most patriotic guy, but never in a kerjillion year would I ever have thought we could have sunk to the level at which we currently reside. And I don't even think we've hit rock bottom..........yet.

the only thing I have going for me is white. I am persona non grata in my own country.