G-d and the FBI 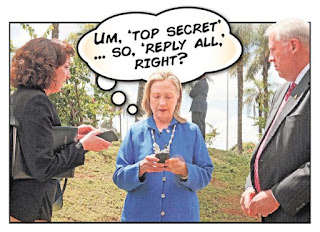 So Hillary won't be charged for her email server.

And predictably, the GOP melts down, as you all well imagined. As does one of my cousins - whom I love, but cannot stand his politics (nor him mine).

I get they need the distraction. Benghazi didn't quite do it for them, so they gotta do something.

Now the GOP wants the FBI to release the files to them, or the House, or something. Is the FBI usually in favour of just opening their files to whomever?

I do love how none of the GOP have bothered to mention that the head of the FBI was a republican selection. Facts. Who needs those?

But to be fair, while some in the media have tried to compare Clinton's faux pas with that of David Petraus, it's apples and mangoes. What they're not doing is comparing it to the RNC having an email server in the White House when GWB was "in charge"......and losing upwards of 20,000 emails.

Nor did the media really play up the fact that Condaleeza and Colin did the exact same things as Hillary, and there wasn't any actual policy to not do it.

But that doesn't play well for the GOP or ratings, I suppose. All that's the past so for some reason it doesn't count?

The GOP will have the news cycle for the next few days. There's no way around that one. And that's on top of the one they had with potential First Husband Bill and his complete and utter fuck up.

I used to think of Bill Clinton as being this great political operative. Clearly, he's not. He's just a stupid fuck from Arkansas.  Or I guess I could just say, "he's from Arkansas". It's basically the same thing.   (sorry Erik.......you're the exception.)   Bill the Bumbling Buffoon.

While I don't hold any of the State Dept. stuff against Clinton - her, not him - I can't say I have ever warmed up to her in the slightest.

I'm sure I'll vote for her, but she's not making it easy.

RAMEN! because voting for the rump will kill us all.

A non-vote for Hillary is a vote for the racist bigoted illiterate homophobe with the bad rug.

Choosing the lesser of two evils is still choosing evil.