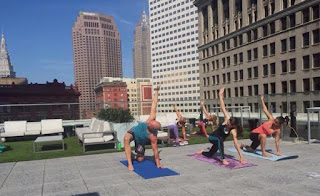 Those who forget history are doomed to repeat it.....so they say.

David and I are morons.

We did rooftop yoga on one of the hottest days of the year. We are morons.

To be fair, we didn't forget anything, but we thought we could beat the odds.

Yoga was to start at 09:45 and was to last an hours. Perhaps, I thought, we could beat the heat. No such luck.

While the title image looks like the yoga crowd was sparse - and it kind of was - but due to the heat, people were spread out wherever it was comfortable. I was in a tiny patch of shade. But due to the haphazardness of where people were, some of us (myself included) weren't facing the instructor. I get discombobulated.

Before the practice, someone from some news something or other was there to take pictures of the us. It was all slightly staged, as it happened before the scheduled practice. No one knows when, if or where the pictures might pop-up.

After the practice, David and I sat around the roof-top. And I took pics of the skyline and cityscape. 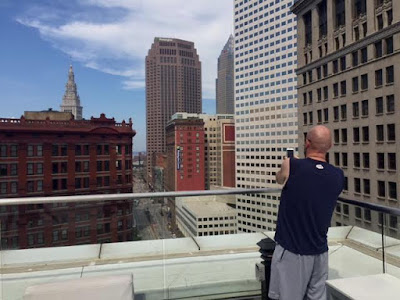 Oddly enough, after the practice, we were asked to stay to do more photos for someone else who is looking to establish her own yoga and boot camp studio. She seems like a totally horrid person. And this time, we were out in the blazing sun - my black mat burning the bottoms of my feet.

I finally just walked away. It's not like I was getting compensated for helping this person who never even bothered to introduce herself to any of us. Nor did she even thank anyone.

I can't believe how hard it is to be a supermodel.


Song by: Dashboard Confessional
Posted by Blobby at 12:03 AM

you is crazy! hopefully all the madness has left cleveburg by now. and fuck that rude bitch!

Well, did ya' go all "Tyra" and throw the phone at her?

On a Roof? I still jealous....it'll be another 12 weeks before I can even attempt ver modified yoga.

I imagine you'd get some nice breezes on a rooftop, but when its in the 90s and sunny and humid... forgettaboudit.