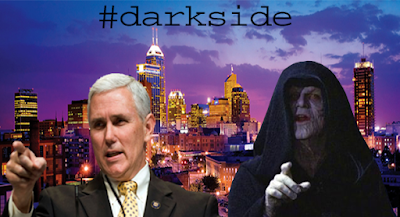 I can't say I'm surprised. But really - what were (t)Rump's other options?

That fat fuck from New Jersey?  Or a thrice married adulterer?

Sure, Don has been married three times too - and is an adulterer - but you can't have people pointing out that they have six marriages between them.

Newt had to go.

And hey, you gotta try to carry the mid-west, so {allegedly} Mike Pence to the "rescue".

What Mikey-boy might not realize is that he might have just dug his political grave. Or worse, he'll be the new Sarah Palin. You know - loser VP who now has a soapbox.

Well if t(Rump) waffled on gay rights and marriage (and he has), let's be clearly, he's about to make someone else tow that line, so he can get the evangelical and far right wing vote. He'll have Pence be his henchman - and job I think he is all too willing to do.

You know, besides his Religious Fraudom law, Pence was (and is) very much against gays in the military, same sex marriage and even civil unions.

During the vetting process - or the talking about potential VPs - Donald said he liked Pence because he's a fighter.

If you mean a man who stands by his convictions, until he has severe political repercussions and then revises his just signed-law - then yes, by all means, Mike Pence is a "fighter" and not a "caver".

Bully for you Donald.

While for some unknown reason, Pence's approval ratings will get a bump from this move, in reality, he's polling in the 40s for being liked. If this were a test - he'd be at an F.  Maybe F-.

In theory, I'm am excited for the debates - VP and POTUS.

In reality, I am not sure I can watch.

Thanks to FB, I'm not sure I'll have to.

Song by: Joy Division
Posted by Blobby at 12:03 AM

pence also hates women; he THINKS he knows what goes on with a lady's internal parts better than she does. FUCK this ignorant fuckhead! and FUCK the rump as well!

So, tRump, who never met an opinion he didn't change ... and often, has picked an antiLGBT bigot to be his Veep.